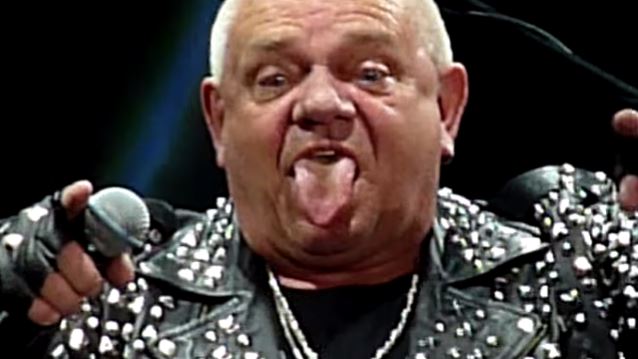 Former ACCEPT singer Udo Dirkschneider says that "clever" marketing on the part of the band's record label helped the current version of ACCEPT land its first-ever No. 1 album in Germany with last year's "Blind Rage".

Asked by The Rock Online if he is bothered by the fact that ACCEPT took the pole position in Germany for the first time with an album that features his replacement, Mark Tornillo, on vocals, Udo responded: "Let's say it this way. I mean, I know the business, I know how everything works, you know. I mean, they were changing the release date [of the album in order to insure that it would place high on the chart]. Normally, it was planned [to be out] one month before [in July 2014], but it was the same time that JUDAS PRIEST was coming out [with 'Redeemer Of Souls']. I mean, I know the business behind [the decision to push the release date back]. You know, and then they moved it to August. August, normally nothing is happening [in terms of big releases coming out]. [It was a] really clever [move] by the record company. I mean, I know how much albums it sold to [land] on the first… to be Number One in Germany. So that's the whole thing behind the scenes. I mean, of course, it's good if they have a Number One. It's, like, yeah, the press [reacts very enthusiastically]: 'Wow...!'"

He continued: "I wanted to see it once live, you know, what they're doing on stage. And let's say it in this way: I was… I cannot really explain it. It was like something like… It was, for me, nothing… like there was no band on stage, you know. For me, it was like they were playing everything without emotion. They [didn't] look [at] each other. It was something, you know, it was like just, 'Okay, here we go... Be finished and go!' And, okay, in a way… It was sold out. But I thought the reaction of the people... Let's say, the most reaction was when they did the old songs. Of course. So, but, you know, and the singer [Mark Tornillo]… In a way, he's a good singer, but when he has to sing all the old ACCEPT stuff, I feel very sorry for him. This is a nightmare."

Udo added: "I don't wanna say anything bad, you know, but it was really, like… I was, like, really, 'What are they doing there!?' I mean, I thought they really [would perform]... yeah, let's say, really with energy and really with, you know, emotion. But this was like something… Okay… There was nothing… There was not a band, for me, on stage. So, but now I saw this, and I wish them all the best."

Asked if a lot of ACCEPT fans recognized him in the crowd during the band's show in Hamburg, Udo responded: "Of course a lot of people recognized me. In the beginning, it was very interesting. I came in when [ACCEPT had] already started [playing], and then I was staying in the back. And then I could see all the people [looking at me], you know, like, 'Err... is this Udo!?' Then the people came up, of course: 'What are you doing here?' I said: 'I watch ACCEPT!" [laughs] 'I wanna see that!' So it was really funny, you know. [laughs] Yeah, what can I say? And then, of course, [people] started taking pictures [with me], [asking me for] autographs, blah blah blah. Yeah, but I don't have any problems to do stuff like that, you know."

He continued: "I mean, yeah, for me, it was really important to… I wanted really… I had the chance [and] wanted to see [the current version of ACCEPT perform] live. And it was very important for me. And now I know what I wanna know from this band, you know, and then I say, 'Okay, I saw it with my own eyes, I hear everything.' That's it."

In a September 2014 interview with Music Enthusiast Magazine, ACCEPT guitarist Wolf Hoffmann was asked if Udo Dirkschneider has tried to reach back out or re-establish communication with his ex bandmates in recent years. "I haven't heard from him in forever other than indirectly in the press, and honestly none of us are even thinking about him," Wolf replied. "It's really not been an issue at all, I mean, we surely put it to rest with this album ['Blind Rage']. Clearly it was a big deal the first time around for [2010's] 'Blood Of The Nations'; a lot of people were asking, 'Why?' and 'What?' and 'How come?' But the story has been told so many times now that it's clear that we've started a new life and Udo didn't want to be part of it. He made his choice, we're moving on, and that's that."