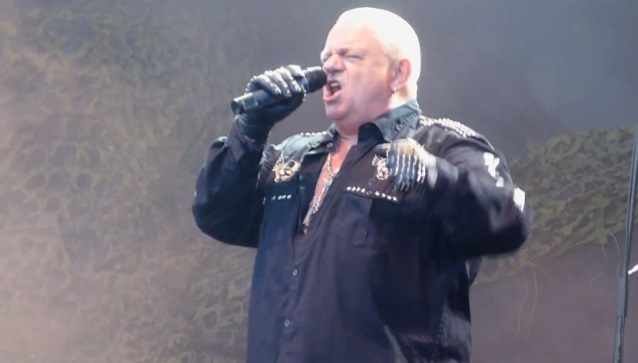 Metal Wani's Owais "Vitek" Nabi recently conducted an interview with former ACCEPT and current U.D.O. singer Udo Dirkschneider. You can now listen to the chat in the YouTube clip below.

Udo: "I only know two songs of the new album. Yeah, they're doing quite well. So, I mean, what can I say? I mean, but ACCEPT is so far away from me. It's like a band for me now… like MOTÖRHEAD, SAXON or whatever, you know. It's, like, okay, there's a band called ACCEPT in this business, and that's it for me. We don't talk to each other. Okay, I wish them always good luck. But I have my own thing. U.D.O., after 15 albums, we're doing quite well. And when people ask me, 'Is there maybe a chance to do a reunion?' I say, 'No reunion.' I mean, why? I'm successful with U.D.O. [So] there's no reason to do this."

On the previous ACCEPT albums, "Blood Of The Nations" and "Stalingrad", both of which featured Tornillo on vocals:

Udo: "Let's say they have not left the band. They were fired. I know that exactly. I'm very good friends with Herman Frank."