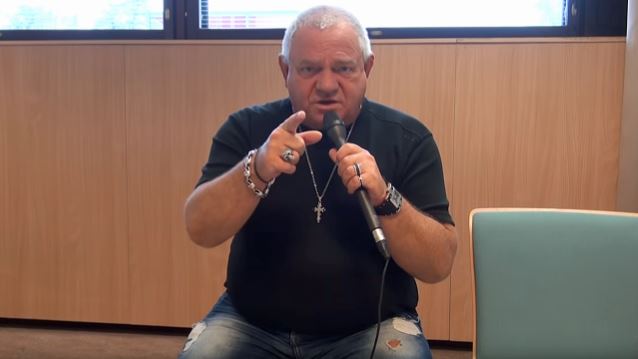 Finland's Kaaos TV conducted an interview with former ACCEPT and current U.D.O. frontman Udo Dirkschneider on March 5 in Vaasa, Finland. You can now watch the chat below.

Asked about the recent passing of iconic MOTÖRHEAD frontman Lemmy Kilmister, Udo said: "Yeah, that was a shock, but when I saw [a] picture [of Lemmy] with my son [that was taken a couple of weeks before his death], how [Lemmy] looks… It's really sad, but with his lifestyle… Hmmm… What can I say? Of course, it's what we're doing also; we're also not doing a normal lifestyle. But, for me, it's, like… I drink also — I like very much drinking wine and stuff like this — but, for me, I wanna do it as long as possible, and I try to stay healthy and not party every night or taking drugs or whatever. So I try to be healthy, that I can do that for a long time."

He added: "On one hand, maybe it's good to say, 'Yeah, I wanna rock and roll all night, twenty-four hours a day.' But, you know, I don't wanna end up like this."

Udo, who will turn 64 next month, said that he will retire from touring when the time is right. "I think I will stop when I think for myself, 'Okay, that's it,'" he explained. "I don't know when that is. [Laughs] But I think… I can only speak for myself. I think I'll know the time [when I should say], 'Okay, that's it. Stop.' But that [doesn't necessarily] mean I [won't do] something [else] in the music business; maybe I'll produce some bands or whatever, stuff like that. But to be on stage and touring, for me, it's like… I always say, I'll do it as long as I have fun to do this. And if I get the feeling, like, 'Oh, no. I don't wanna tour anymore,' and stuff like that, then that will be the point to say, 'Okay, that's it.' But I don't see at the moment the end. [Laughs]"

Udo last month kicked off a European tour on which he is performing classic songs from ACCEPT one last time under the DIRKSCHNEIDER banner. According to the singer, the trek will take him through the end of 2016 and possibly into early 2017, after which he will begin work on the next U.D.O. studio album. "And then, after [the LP is done], [we will] start again with U.D.O. touring," he said. "So that means, in a way, already we have a plan [to stay busy until], let's say, the end of 2018."

The April 2 DIRKSCHNEIDER concert at Kaminwerk in Memmingen, Germany will be professionally filmed and recorded for a DVD and CD release later this year.

U.D.O.'s latest studio album, "Decadent", was released in Europe in January 2015 via AFM.