Former ACCEPT singer Udo Dirkschneider will celebrate the 35th anniversary of the band's "Metal Heart" album by performing it in its entirety at next year's edition of the Wacken Open Air festival, set to take place July 30 - August 1, 2020 in Wacken, Germany. He also promises a big surprise for the show.

In addition, Udo and his U.D.O. band will once again perform with the music corps of the German Armed Forces. The combination, which, at first glance, seems unusual, already thrilled us at the Wacken Open Air 2015. After another concert in Elspe in 2018, the third collaboration of the more than 100 musicians of U.D.O. and the German Armed Forces will happen at Wacken in 2020. By the way, a joint album with exclusively new songs will also be released in mid-2020.

Last year, Udo confirmed to Greece's Rock Overdose that he would no longer perform any ACCEPT songs live once he has completed his current touring obligations with his DIRKSCHNEIDER project. "I did now the DIRKSCHNEIDER thing for nearly three hundred shows — I played only ACCEPT songs," he said. "If [the fans] wanna hear some ACCEPT classic stuff, what can I say? Then please go to [see] ACCEPT; they're still touring.

Asked if he still has any contact with his former bandmates, Udo said: "No. No contact anymore. Definitely no contact. There was too many bad things [that] happened. I don't wanna be in contact with them anymore."

Back in 2015, ACCEPT guitarist Wolf Hoffmann dismissed Dirkschneider's comment that the band's current lineup — which includes ACCEPT's singer of a decade, Mark Tornillo — performs live "without any emotion," "It's just hilarious at this point," Wolf said. "It's just a big joke in our lives. And we just go on about our lives, and we do our thing, and we just… We let these things go by and laugh about it. He's actually sort of our press agent, in a way. He keeps us [in the news]."

The DIRKSCHNEIDER tour was originally supposed to conclude with the band's North American run in January/February 2017, but was subsequently extended through the fall of 2018.

DIRKSCHNEIDER released "Live - Back To The Roots - Accepted!" in August 2017 as a DVD/2CD, Blu-ray/2CD and gatefold triple vinyl in two different colors. 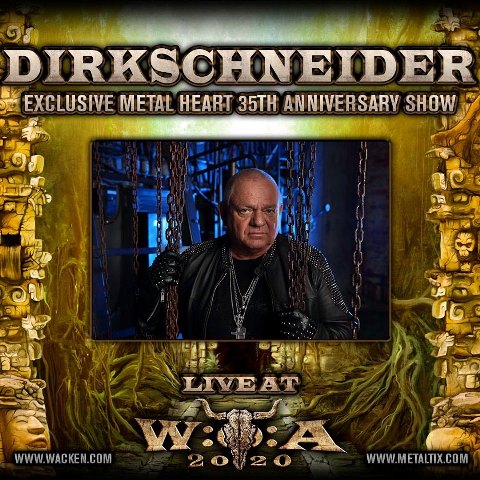