The video for the song "I'm Alright" can be seen below.

"Stairway To Hell" heralds UGLY KID JOE's return, containing songs spanning the full repertoire of influences which made the band one of the prime soundtracks for young snowboarders, surfers, keggers and characters worldwide. Whether it's "Devil’s Paradise", with its hypnotic riffery and hook line, grooving and grinding its hips seductively, the melodic power-fueled darkness of "No One Survives" or the irrepressibly memorable chug-and-chorus of "I'm Alright" it's clear that UGLY KID JOE have everything they started with plus fatter chops and a (frankly) superior curve on songwriting.

UGLY KID JOE frontman Whitfield Crane told Neuweltmusic, "17 years ago, we were excited to prove ourselves with our new, heavy music. Sometimes we'd leave 'Cat's In The Cradle' or 'Everything About You' out of the set. That was understandable in the sense of wanting to prove ourselves — it was also childish. It drove me crazy, but now it's all good. Now we embrace both our sides. They're part of our dynamic and our history."

UGLY KID JOE released three full-length albums and toured extensively throughout the 1990s before disbanding in 1997.

The epicenter of UGLY KID JOE is Crane, a wonderfully cathartic wrecking ball of rock 'n' roll energy as it used to be served, on the rocks with no need for tonic. He's joined by long-time co-conspirators, Klaus Eichstadt and Dave Fortman (guitars) as well as Cordell Crockett (bass) and Shannon Larkin (drums.) Several members have built pretty substantial resumes during UGLY KID JOE's break. Fortman produced albums by EVANESCENCE, SLIPKNOT and MUDVAYNE, while Larkin hit the skins for multi-platinum-sellers GODSMACK.

Asked what the catalyst was in bringing the band back together, Crane told Music-News.com, "I never thought it would go down personally, but Dave was producing a band called GODSMACK and in that band there's a magnificent drummer called Shannon Larkin who, of course, is the UGLY KID JOE drummer, so basically you had Dave Fortman producing Shannon's band, and those guys were just talking and having a good time. I guess they talked about it and called Klaus, my best friend and guitar player of UGLY KID JOE, they said, 'Hey, man, we should make some music.' Klaus shot me a call and asked me if I wanna play some heavy metal music, and obviously I said yes."

Regarding why UGLY KID JOE split up in the first place, Crane said: "In late '96 and January '97 when we officially spilt, no one was into it; you could feel the wind out of the sails. We were sick of each other and we had the courage to leave. It's okay to leave a toxic situation. So that said, fast forward 16 years later, and everyone wants to be in the room, we’re excited to be around each other and be creative. We've all gone off and done this myriad of stuff, some of us are married and have kids, so now we're armed with all these various experiences and it's really exciting and cathartic in some sense. We didn't know how it would work out, if we would get any shows, and being asked how we feel about being able to support ALICE COOPER [on a recent U.K. tour], we [were] blown away." 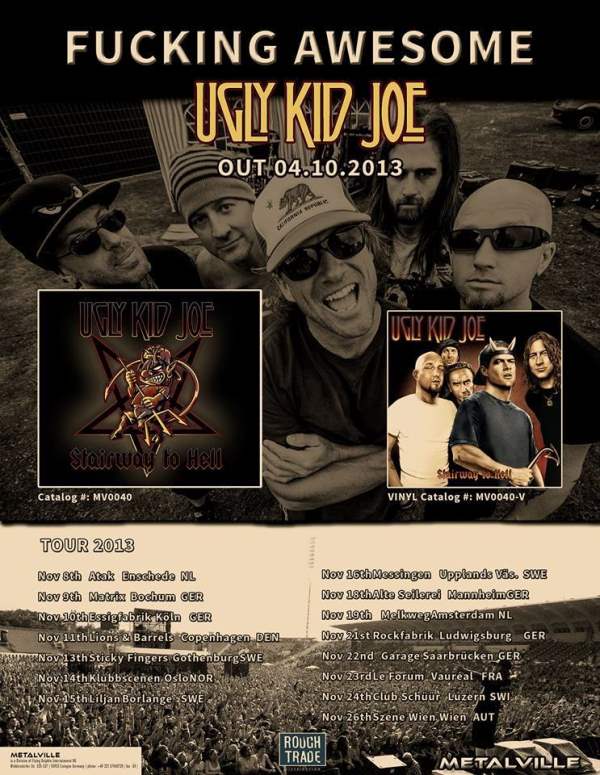