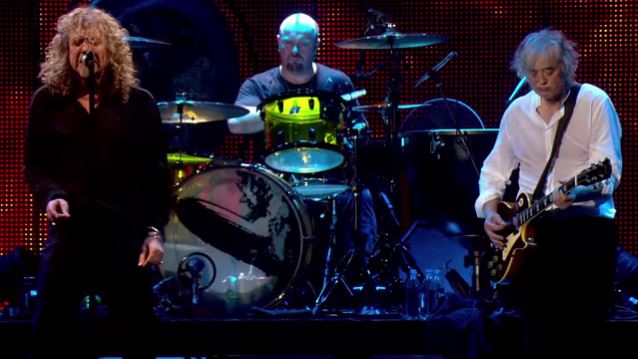 UK tabloid newspaper The Mirror published a story over the weekend claiming that Robert Plant nixed a nearly $800 million dollar deal for a LED ZEPPELIN tour proposed by British mogul Richard Branson. According to the report, Branson, a die-hard fan of the band, pitched Plant, Jimmy Page, John Paul Jones, and Jason Bonham the record-breaking offer in exchange for 35 dates in three cities: London, England (at the O2); Berlin, Germany; and New Jersey, USA. In addition to the initial shows — which would net the band $397 million — ZEPPELIN was offered an additional $111 million by Branson for the merchandise for the tour and an option to play 45 additional shows at five separate venues. The lion's share of the money would have been earned by the founding members, with Jason Bonham — son of the late John Bonham — being paid a fee for each show.

Branson, reportedly was prepared to "re-brand" one of his jumbo gets "The Starship" for the band's personal use on the tour, with the back row of the jet's seats being sold as "special LED ZEPPELIN" seats four nearly $160,000 each.

One source "close to the band" spoke of Plant refusing the offer: "They have tried to talk him round but there is no chance. His mind is made up and that's that." Another "insider" said, "Jimmy, John, and Jason signed up immediately. It was a no-brainer for them but Robert asked for 48 hours to think about it. When he said no and ripped up the paperwork he had been given, there was an enormous sense of shock. There is no way they can go ahead without him."

Shortly after ZEPPELIN's December 10, 2007 reunion gig in London, Jason Bonham told The Pulse Of Radio that a future run with the band was entirely up to Robert Plant, Jimmy Page and John Paul Jones, and that if they decided to go ahead with it, he was on board immediately. "I didn't want anything else more than when I rehearsed with them," he said. "If it hadn't gone any further, just that day, and we went out for dinner, and just the backwards and forwards banter and the laughing and joking — that was enough. But if they decide to do it again, of course I would love to. But that's up to them. Only time will tell. If you'd had asked me a year ago, 'Are they gonna do a date next year?' I'd have gone, 'No way.' So I was proved wrong once before."