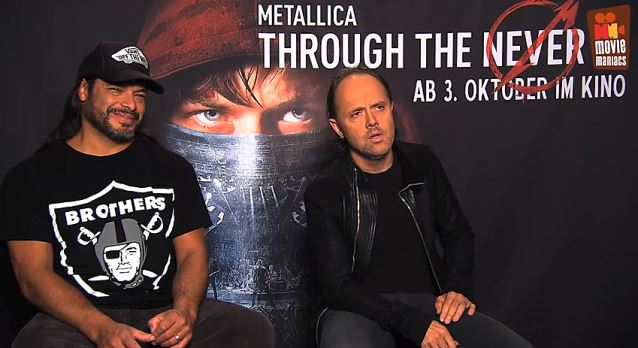 In METALLICA's new movie, "Metallica Through The Never", fans have a chance to see the band performing on a massive stage, specially constructed for the film, that incorporates elements of METALLICA live shows from the past 30 years. Movie Maniacs asked drummer Lars Ulrich and bassist Robert Trujillo if there is any chance of taking that stage show on the road. "Let's see how well the movie does and let's see if there's any kind of… I mean, we've never toured the stage," Lars replied (see video below). "It was just made for the movie. So there's definitely a chance that we may tour. I don't think… It's not gonna happen, like, in the next couple of years, but maybe it'll be something that we come back to five or ten years down the line. Right now, we wanna go and work on another METALLICA record for the better part of the next year, or whatever, but we may tour it one day, absolutely."

"Metallica Through The Never", opened this weekend to an estimated $1.67 million — the best opening for a concert film ever at IMAX theaters. The movie, which debuted on 308 3D IMAX screens, earned an estimated $780,000 on its first day. That gave the film a per-location average of $5,482. A blend of concert movie and fictional narrative, it will expand to 650 theaters next weekend.

Financed by the METALLICA members themselves at a budget of $18 million, "Metallica Through The Never" is the first new release via Picturehouse, the full-service independent film marketing and distribution company started in 2005, which reopened its doors with founder Bob Berney at the helm. The film, written and directed by Nimród Antal ("Kontroll", "Predators"), stars members of the iconic rock band and Dane DeHaan ("Chronicle", "The Amazing Spider-Man 2"). DeHaan plays a young band crew member who is sent out on an urgent mission while the band is playing a rousing live set in front of a sold-out crowd and unexpectedly finds his world turned completely upside down.