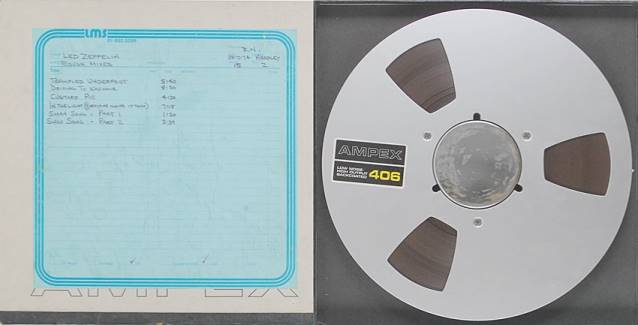 According to The Pulse Of Radio, several unreleased LED ZEPPELIN studio tapes will be auctioned next month at the Marvels Of Modern Music auction. The tracks are rough, early mixes from the band's sole double studio set, 1975's "Physical Graffiti". The tapes come from the private collection of noted engineer Ron Nevison, who is best known for his groundbreaking work with Pete Townshend on THE WHO's 1973 "Quadrophenia" — and who helped design Ronnie Lane's Mobile Studio, which was housed in the 26-foot Airstream trailer, which ZEPPELIN used for a portion of the "Physical Graffiti" album.

During a key session for the album, John Paul Jones was late to the studio, leaving Jimmy Page and John Bonham to work out the riff and basic track for "Kashmir" — which was recorded under the working title, "Driving To Kashmir".

Jimmy Page told The Pulse Of Radio that he knew from the beginning that the magic surrounding LED ZEPPELIN wouldn't last forever. "I said, basically around the time of the first album, it's all a race against time, and I think it is. It still is. It still is a race against time and trying to do good work and improve on what you've done. It's more difficult as you get older because you know your days are numbered, really. Within ZEPPELIN, we had this amazing vehicle that we could continue and continue and just come up with amazing things — which fortunately we did continue, and we did come up with amazing stuff. But I still thought it was a race against time. I had no idea how prophetic it would be with the loss of John Bonham."

John Paul Jones told The Pulse Of Radio that band politics never came into play when the band was working up new material. He said that ZEPPELIN always understood the importance of quality control. "We always made music in the same way — we all know whether something works or not," he said. "When we wrote music together, y'know, if somebody came up with an idea, if it didn't work, you didn't have to be taken to a room quietly to say, 'Y'know, we can't use this,' y'know? Everybody knows, 'Hey, this is rubbish! Y'know, [laughs] let's do something else!' And we'd go on to something that does work, and then everybody knows it works."

Ron Nevison is also auctioning other rough mixes from his collection, including tracks from OZZY OSBOURNE, BAD COMPANY, ERIC CLAPTON and THE WHO.