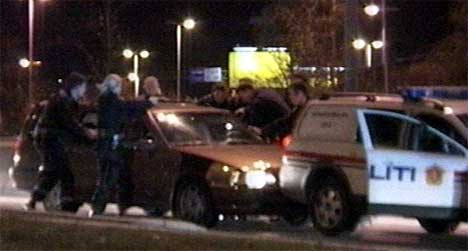 UPDATE: VARG Held Family At Gunpoint, Fled Prison Because He Feared Attempt On His Life

Varg Vikernes threatened a family with a pistol and hijacked their car in a failed bid to elude the Norwegian police during his 24 hours on the run, it was reported Monday.

At approximately 4:30 p.m. on Sunday (October 26),a family of three driving through the valley known as Numedal in Buskerud County reported being flagged down by a pedestrian. When they stopped to assist him, the pedestrian believed to be Vikernes allegedly threatened them with a handgun and forced them to surrender their car.

"They explained that they were held at gunpoint and were forced to leave the vehicle, and that the man [Vikernes] took off in it," police spokesperson Knut Svalheim told wire service NTB.

The car was ultimately spotted around midnight Sunday by an unmarked police patrol in Romerike, north of Oslo. Believing Vikernes to be armed, police responded with five police cars and armed officers.

"We signalled for him to pull over, but when he failed to respond, we had to press his car in between two police cars [Photo#1, Photo#2, Photo#3]," police operations leader Vidar Hjulstad said.

Although no gun was found, a knife or a bayonet was reportedly retrieved from the vehicle. However, at this time, it is not clear if the knife belonged to Vikernes or the family who owns the car.

On Monday, authorities will decide whether Vikernes should return to the low-security prison Berg, where he was serving the a 21-year-sentence for the August 1993 murder of MAYHEM guitarist Oystein Aarseth (a.k.a. Euronymous),or be transferred to a maximum-security prison.

Meanwhile, Varg's mother Helene Bore has revealed the content of a letter her son left her while visiting her Saturday. In it, Vikernes writes that following a critical article in the local paper Tønsbergs Blad on October 15, there was an attempt on his life when another inmate tried to strangle him.

"Mother, I will flee," Vikernes allegedly wrote in the letter.

"When I read in his letter that his life had been threatened, I had a better understanding of why he made the choice of [trying to flee]," Helene Bore told Dagbladet. "He couldn't tell the prison staff about the threats, because he was afraid they'd put him back in a locked cell. But he feared the threats."

Even though Vikernes was sentenced to 21 years in prison in 1994, he was set to serve only another two years of his sentence. A couple of months ago, he was transferred to the low-security prison Berg in Tønsberg where the main gate isn't locked. Still, inmates very rarely opt to escape since they only have a short period of time left of their sentences before being released.

The hunt for Vikernes is now set to spark a debate in Stortinget, Norway's Parliament, about the prison system which allows inmates short leaves from jail. A member of the opposition has already called for a review of the system.

"The rules of how early one is released have just been changed and Varg was certain he would have to serve at least another four years," explained Bore who believed this contributed to her son's frustrations.

"I was as surprised as everyone else when he fled. But when I read the letter, I could see that the situation seemed hopeless to him."

The article in Tønsbergs Blad was critical of the fact that Vikernes, a convicted murdered with right-wing beliefs, was transferred to a low-security prison. Eight years ago, Varg started the national socialist group Norsk Hedensk Front (Norwegian Heathen Front),which he ran from his cell in Trondheim at the time. In an e-mail to Dagbladet, NHF claimed that Vikernes is no longer a member of the organization "because it's best both for us and him."

According to his mother, Vikernes no longer is in contact with neo-nazi groups and his one and only wish is to lead a normal life.

"For a while he thought that it was possible for him to have a normal life," she said. "But after the article in that newspaper he felt that it was hopeless. He feels that no matter what he does he will be haunted by the past. He will never be done paying for his crimes."

Helene Bore is concerned for her son, but happy that he wrote the letter.

"This way I don't have to fear that someone has done something to him or that he's done something to himself," she said. "I do wish he'd chosen another way out. If he'd talked to me, I would've advised him to complete his sentence. But he's apparently given the matter a great deal of thought and couldn't bring himself to deal with it in any other way. He's spent his entire adult life incarcerated and is a good boy."