Varg Vikernes (a.k.a. Count Grishnackh),the BURZUM mastermind who was convicted of murdering MAYHEM guitarist Oystein Aarseth (a.k.a. Euronymous) in August 1993 and setting fire to three churches, has finished writing nine songs for BURZUM's new album, which he hopes to release next year. He tells Norway's Dagbladet that several record labels are interested in issuing the band's first LP in eleven years. "I want to take my time [with the album], so that I can get it the way I like it," Vikernes says. "It will be metal, and the fans can expect to hear some real BURZUM."

Dagbladet has posted several exclusive excerpts from Varg Vikernes' as-yet-unpublished book which he wrote during his nearly-16-year prison stay. The book contains Varg's personal account of of what transpired in the years from the Norwegian black metal community's inception in 1991 until he was convicted for murder and church fires three years later.

"I am not the 'Count' that has been portrayed in the media," Vikernes tells Dagbladet. "That is just sad. Those who have known me a long time know that what was written about me was not the complete truth. But I am partly to blame for how things were presented in the press. That's why I wrote this book, which I hope to release via a publisher. I will lay this issue to rest and put what happened behind me. I will begin a new phase in life."

Dagbladet: Do you regret the fact that you killed another human being?

Vikernes: "I cannot regret the fact that I took the life of someone who wanted to kill me. I felt threatened by his plans, but it was never my intention to kill."

Dagbladet: Do you think that you can kill again?

Vikernes: "Everyone is capable of killing. But there is less chance that I will kill again, because I've been in that situation before, and so I know better how to deal with it. It is not possible to know how to behave in threatening situations before you even end up in such a situation. Had I been in the same situation today, I would have contacted the police first."

Dagbladet: Are you a racist?

Vikernes: "Yes. But I don't hate anybody. Hate is irrational. I am a rational person."

Dagbladet: Are you proud of who you've become?

Dagbladet: Do you feel that people are afraid of you?

Vikernes: "From how [things] have been portrayed in the media, I understand that [is the case]."

Although his parole application was denied four times — most recently in September 2008 — Vikernes received word in February that he would be released after serving almost 16 years in prison. He was finally allowed to leave this past spring, according to Dagbladet.

Vikernes currently resides in Bø, a municipality in the county of Telemark, Norway. Varg purchased the farm sometime last year and lives on the property with his French wife (whom he met while he was incarcerated) and son.

"It was completely random that we ended up buying a home here," Vikernes tells Dagbladet. "We wanted a quiet and peaceful place with beautiful scenery outside the city. It is so beautiful up here. Here we can be by ourselves. But there is a lot of work that is required to maintain the house, lawn and garden."

Photo below is displayed from Dagbladet 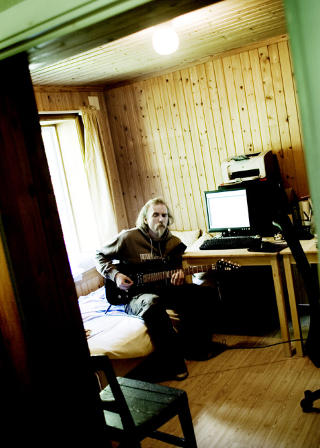