Former GUNS N' ROSES/current VELVER REVOLVER bassist Duff McKagan's raw punk approach and melodic riffs lay the foundation of some of the most influential songs of all time.

In his IMV "Behind the Player" DVD, Duff gives an intimate behind-the scenes look at his life as a professional musician including rare photos and video footage. Duff then gives in-depth lessons for how to play "Slither" and "Set Me Free" by VELVET REVOLVER on bass and jams the tracks with JANE'S ADDICTION drummer Stephen Perkins.

"Video Tab" shows exactly how Duff plays the two tracks. The video-game-style animated tablature is similar to Guitar Hero, but shows how to play the tracks for real.

A trailer for Duff's IMV "Behind the Player" DVD can be viewed below. 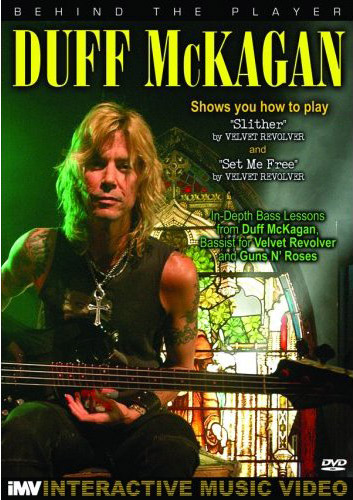