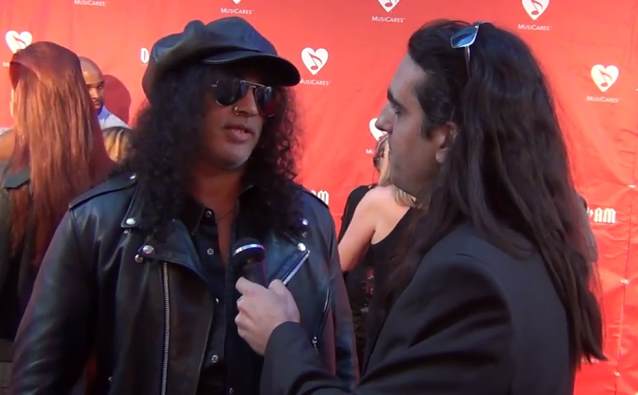 Argentinean rock journalist Lucas H. Gordon, who currently resides in Hollywood, California, conducted an interview with Slash on the red carpet of this past Monday's (May 12) 10th annual MusiCares MAP Fund benefit concert, which honored BLACK SABBATH singer Ozzy Osbourne. Speaking about the current status of VELVET REVOLVER, the band he formed in 2002 with fellow ex-GUNS N' ROSES members Duff McKagan and Matt Sorum, Slash said (see video below): "I think we're gonna audition a singer coming up. So there's that. But I'm gonna be out on the road for the next year and a half [with my solo band], so…"

In a recent interview with Rock Revolt Magazine, Sorum called the launch of VELVET REVOLVER the" biggest moment" of his career. He explained: "Because at a certain point during the formation, I was like, 'Can we really do this? Can we really pull this off again?' And we all did. We got together and had a very successful band after GUNS N' ROSES. That was really icing on the cake, especially for Slash, Duff and myself. To be able to come out of a band that big, and basically have Hollywood turn their back on us, was initially very difficult — and the answer to the low point. To go back and reinvent ourselves wasn't easy. When we managed to do just that, we were very, very ecstatic.