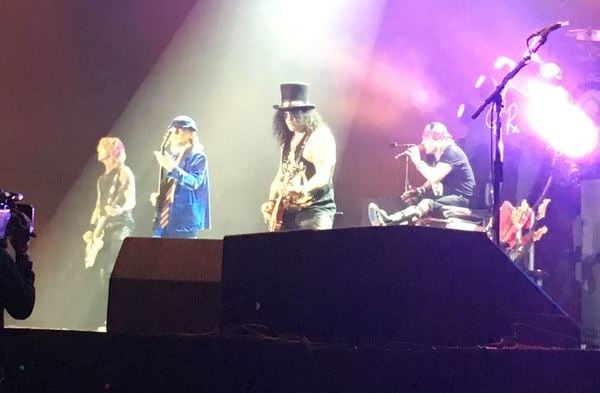 "Since I can't run around for you, we're gonna bring out a friend, put a little life into things for us," GUNS N' ROSES singer Axl Rose, who is still performing while seated due to a fractured foot, told the audience before welcoming Young to the stage.

Young is no stranger to Coachella, having headlined last year's event with AC/DC.

As previously reported, Rose will front AC/DC when the legendary rockers resume their "Rock Or Bust" world tour next month. The European stadium tour dates begin on May 7 in Lisbon, Portugal and run through June 12 in Aarhus, Denmark. Following this European run of dates with AC/DC, Rose will rejoin GUNS N' ROSES for the "Not In This Lifetime" summer stadium tour.

The ten postponed AC/DC U.S shows will be rescheduled and announced imminently, also with Rose handling the vocals.