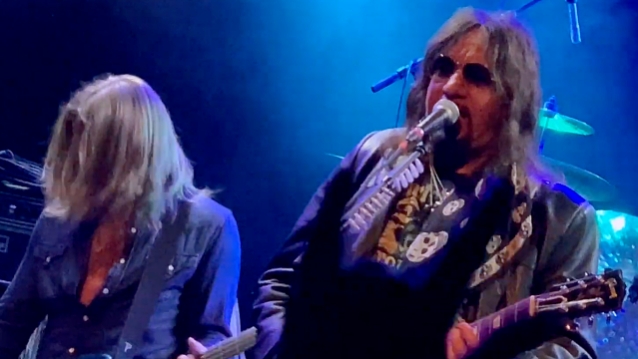 JAM Magazine has uploaded video footage of Ace Frehley performing the song "Rip It Out" on November 9 at Trees in Dallas, Texas. The clip, which was filmed by Metal Dave Media, can be seen below.

Last fall, Frehley parted ways with the solo band that backed him on some of his most recent tours — Richie Scarlet on guitar, Chris Wyse on bass and Scot Coogan on drums/vocals — and replaced them with the musicians that played with KISS bassist/vocalist Gene Simmons on his solo dates: Philip Shouse on bass, Ryan Cook on guitar/vocals and Jeremy Asbrock on guitar/vocals. Rounding out Ace's current band is drummer Matt Starr (MR. BIG).

Frehley first left KISS in 1982. He rejoined in 1996 and parted ways with the band once again in 2002 after the conclusion of their first "farewell tour." Since his departure, guitarist Tommy Thayer has assumed the role of the Spaceman.

Frehley's latest album, "Spaceman", was released in October 2018 via eOne. Gene co-wrote two tracks on the disc, "Without You I'm Nothing" and "Your Wish Is My Command", the latter of which also features Simmons's bass playing.

Frehley recently completed work on "Origins Vol. 2", the sequel to his 2016 collection of cover songs that inspired the former KISS guitarist. The LP, which is tentatively due in early 2020, will feature guest appearances by Lita Ford (singing "Jumping Jack Flash") and CHEAP TRICK's Robin Zander (singing HUMBLE PIE's "30 Days In The Hole").