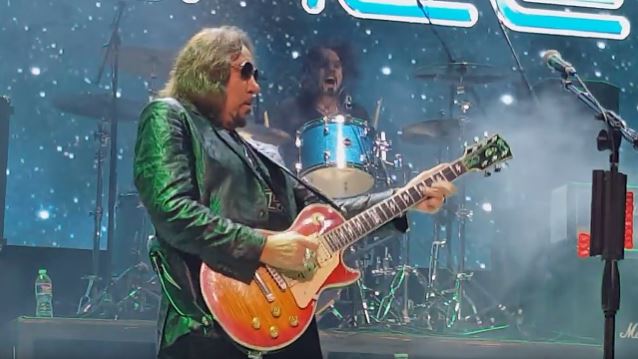 JAM Magazine has uploaded video footage of former KISS guitarist Ace Frehley performing the song "Rip It Out", "Toys" and "Rocket Ride" at Gas Monkey Live in Dallas, Texas on August 18. Check it out below.

According to The Pulse Of Radio, Frehley recently said that Gene Simmons and Paul Stanley's mistreatment of him at KISS's 2014 Rock And Roll Hall Of Fame induction actually inspired him musically. Frehley, who released the covers collection "Origins, Vol. 1" back in April, received great reviews and scored a Top 25 hit with the set. To the surprises of many, Paul Stanley has joined forces with Frehley on the album, taking the lead on a cover of FREE's classic 1970 track "Fire And Water". The recording marked the first time the KISS co-founders appeared on an original album together since the band's 1998 set, "Psycho Circus".

Frehley revealed to The Pulse Of Radio that the impetus for "Origins, Vol. 1" reaching its potential actually came from his treatment by his former bandmates at the Rock Hall induction. "As you probably know, we were asked to perform at the Rock And Roll Hall Of Fame ceremony, by the Rock And Roll Hall Of Fame, and me and Peter [Criss] were up for doing that and Paul and Gene shot it down, y'know?" he said. "They made some innuendos that maybe me and Peter weren't up for the task, and that just made me do a better record. [Laughs]"

The Pulse Of Radio asked Frehley how his sobriety improved the recording process this time around. "I'm a lot more focused and I think when people listen to this album, they're probably going to say that — in fact, a lot of reviewers have already said that," he said. "I'm a lot healthier than I was ten years ago. Not everybody can say that in their 60s, y'know, that they're healthier than they were in their 50s. So, I mean, it's a big plus. Y'know, I got a beautiful lady that I'm engaged to, who co-wrote two songs on the record with me and, y'know, life's good today."