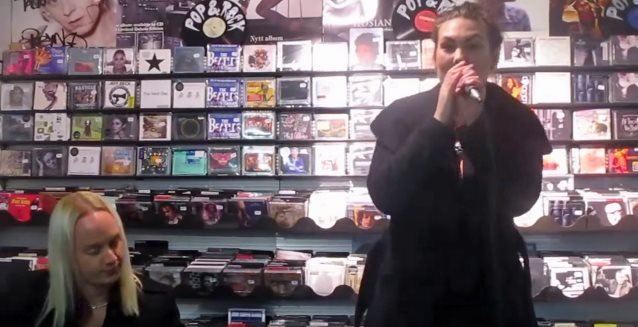 Video footage of AMARANTHE guitarist Olof Mörck and vocalist Elize Ryd performing an acoustic version of their new single, "That Song", on October 20 at the Bengans record store in Stockholm, Sweden can be seen below. The song is taken from the band's epic and gloriously over-the-top new album, "Maximalism", which was released on October 21 via Spinefarm Records.

Refusing to be pinned down by genre or convention, AMARANTHE have consistently pursued the less travelled path, blending different sounds and styles to create a signature hybrid approach, and "Maximalism" sees their collective wide-angle vision laid out with greater skill and conviction than ever before.

From the locomotive power of "Faster" and "Fury" through to the more measured drama of "Limitless" and "Endlessly" (a solo tour de force for singer Elize Ryd),this is AMARANTHE ramping up both the energy and the emotion, and generally pushing everything to the max.

The album is full of songs so catchy that they embed themselves in your brain for hours, and "That Song" is easily one of the most memorable AMARANTHE numbers to date.

The official video for "That Song" was directed by longstanding collaborator Patric Ullaeus and it mixes a gripping narrative with performance footage, finding the members of the band playing a variety of roles, as musicians in blue-collar gigs at the crossroads in their respective lives.

Said Mörck: "What song? 'THAT song'! Our very first single and video from our brand new album, 'Maximalism', is out now! Representing a fresh take on the AMARANTHE approach, it is part of the wide spectrum of sounds that is 'Maximalism'.

"The video represents the struggle that comes from following your dreams no matter what the cost. Even if you are on the downside of life, one day there will be a turning point when it all becomes clear — to the sound of 'That Song'."

In support of "Maximalism", AMARANTHE has just embarked on a headline European tour with SONIC SYNDICATE and SMASH INTO PIECES guesting on all shows.