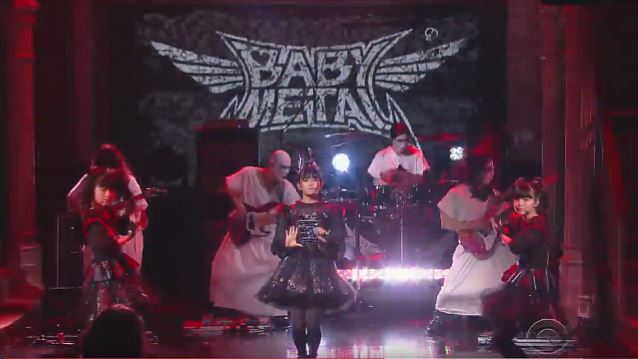 BABYMETAL's second album, "Metal Resistance", was released on April 1 via RAL/Sony Music Entertainment in the U.S. and earMUSIC in Europe.

"Metal Resistance" features songs that have already been performed live, as well as many never-been-heard-before new songs.

As was the case with BABYMETAL's debut, "Metal Resistance" contains both songs performed as solo tracks, and as a group. "Amore -Aoboshi-" and "No Rain, No Rainbow" is performed by Suzuka Nakamoto (a.k.a. Su-Metal),and "GJ!" and "Sis. Anger" are performed by Yui Mizuno (a.k.a. Yuimetal) and Moa Kikuchi (a.k.a. Moametal).

BABYMETAL kicked off the 2016 world tour with a headline show at the world-famous Wembley Arena, U.K. on Saturday, April 2, making history by becoming the first Japanese artist to headline the legendary venue.

BABYMETAL's members admit that they had never listened to metal before joining the group. The girls wear gothy schoolgirl costumes, do choreographed dance routines and bang their heads violently.