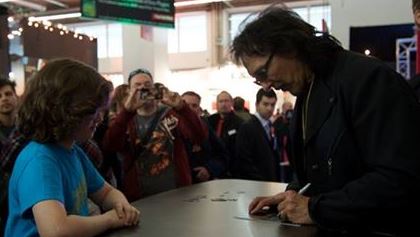 BLACK SABBATH guitarist Tony Iommi took part in a signing session earlier today (Friday, April 17) at the Laney booth during the Musikmesse trade show in Frankfurt, Germany. Video footage of his appearance can be seen below (courtesy of MixMusic-Company.com).

Iommi last week dismissed rumors that his health is the reason why the band canceled an appearance at this year's edition of Ozzfest Japan in November. Iommi, who was diagnosed with lymphoma in early 2012, wrote, "I'm not sure how the rumor of my being unwell started as I was away on holiday!" He added, "Once you've had something like lymphoma, the fear that it will return never leaves. All I can say is that right now I'm fine and have regular blood tests."

Although it was announced last month that SABBATH would give its final Japanese performance at the event, the ban dropped off the bill on April 8. SABBATH singer Ozzy Osbourne will now perform solo instead, accompanied by yet-to-be-disclosed "friends."

Ozzy previously embarked on an "Ozzy And Friends" tour in 2012, shortly after Iommi revealed his cancer battle, to fill in for scheduled BLACK SABBATH concerts throughout Europe.

Ozzy has said previously that BLACK SABBATH planned to record one final studio album in 2015, to be followed by a farewell world tour. A rep for SABBATH told Rolling Stone on April 9 that there have been talks about a farewell tour but nothing has been confirmed.

Here are a couple of pictures from earlier today at the Frankfurt Music show.