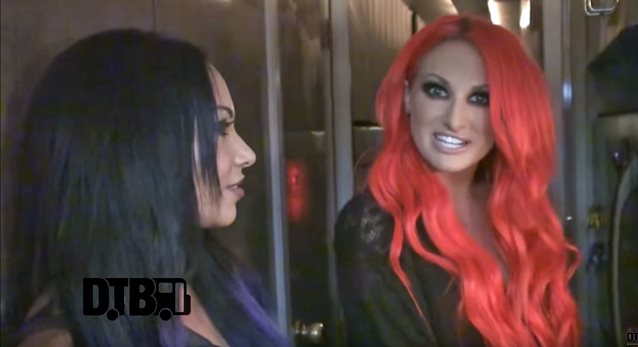 Each episode of Digital Tour Bus's "Bus Invaders" takes you inside the touring vehicle of one of today's top touring acts. In this episode, which was filmed on August 22 in Franksville, Wisconsin, BUTCHER BABIES frontwomen Carla Harvey and Heidi Shepherd show you around their tour bus prior to the band's appearance at WIIL Rock Fest 2015.

"Igniter", the new video from BUTCHER BABIES, can be seen below. The song is taken from the band's second album, "Take It Like A Man", which was produced by Logan Mader, who has previously worked with FIVE FINGER DEATH PUNCH, DEVILDRIVER, CAVALERA CONSPIRACY and GOJIRA.

Shepherd stated about the "Igniter" clip: "We've all been in that different state of consciousness where rage over takes over your body and mind. 'Igniter' is about these emotions and about that last straw that breaks you.

Added Harvey: "'Igniter' is a song about the anger and frustration that we can let consume and even destroy us at times.