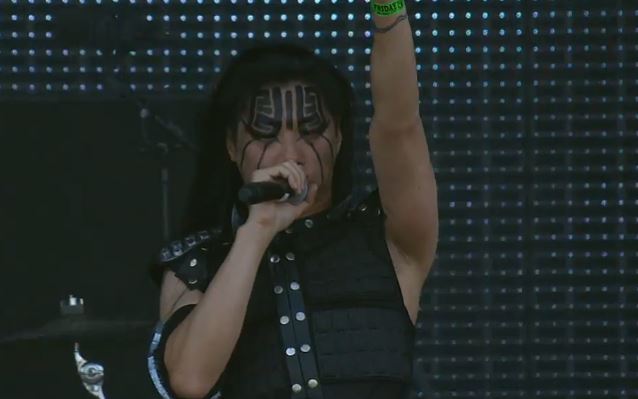 Having appeared twice before at Wacken Open Air in Germany, Taiwanese metal band CHTHONIC performed for the third time at this year's edition of the music festival — and for the very first time, it played on the main stage Blackstage on August 1.

The works of CHTHONIC stand out in the ring of metal bands around the world as "Orient metal." This time, to completely present such enchanting music style to European fans, CHTHONIC shared the stage with the Chai Found Oriental Orchestra, which performs with a variety of traditional instruments including hena, ruan, box zither, pipa, yangqin, flute, and sheng. The collaboration definitely brought a unique musical feast to fans in Europe.

CHTHONIC is one of the most outstanding East Asian metal bands in the world that has participated the Ozzfest in the U.S., Download and Bloodstock in the U.K., as well as Fuji Rock and Loud Park in Japan. CHTHONIC is the best-known metal band in its own country Taiwan, and has performed at more than 500 concerts around the world in nearly a decade.

Chai Found Oriental Orchestra is an award-winning orchestra of traditional instruments and had performed four songs in CHTHONIC concerts in Taiwan, which were recorded on the "Ián-bú" DVD as classic examples of cooperation between metal rock and traditional music. This time, CHTHONIC shared it with fans at Wacken Open Air and expanded the four-member mini-orchestra to a 10-member full orchestra, giving European audience something they have never experienced before.

Professionally filmed video footage of CHTHONIC's performance at this year's Wacken Open Air festival can be seen below.

After more than 70 concerts in its European and U.S. tours last year, CHTHONIC will perform at many internationally renowned music festivals, including the Brutal Assault in Czech Republic, and Summer Sonic in Tokyo and Osaka, Japan.

After tours in Europe and in Asia in the summer, CHTHONIC will return to Taiwan for its new movie project, and will switch into a full-gear mode to prepare for its new album at the beginning of the next year.