AXS TV presents a super-sized 90-minute episode of "The Big Interview" on Tuesday, February 23, at 8 p. ET / 5 p.m. PT, as legendary newsman Dan Rather sits down with rock n' roll icon Sammy Hagar, the host of the AXS TV series "Rock & Roll Road Trip" and the New York Times best-selling author, entrepreneur, Rock And Roll Hall Of Famer, and Grammy-winning singer whose trademark vocals have powered such favorites as "I Can't Drive 55", "Why Can't This Be Love", "Right Now" and more. During the candid conversation, Rather gets the boisterous front man to open up as the pair cruise around in Sammy's $1.3 million LaFerrari —the fastest street-legal car in the world — delving into Sammy's personal life, his business endeavors, and continued success as one of rock's most enduring figures.

Video footage of Rather getting a ride in Sammy's $1.3 million LaFerrari can be seen below.

While Hagar has built a legacy for himself as a critically acclaimed musician and innovative businessman, he remains grounded and truly appreciative — for both his numerous achievements, and his family. He says, "I'm a great pop to my kids, and I'm a great husband to my wife. To my friends and family, I am just a guy I think that just really is so humbled by my success that he just goes around smilin' all the time, 'cause I'm pretty happy about it. I'm kinda shocked, you know? And I really think that that is who I really am deep down inside. And that's why I think I'm still a good performer. At 68 years old, I still go out and give everything I got because I'm so grateful."

Growing up with an alcoholic father in a family that struggled to make ends meet, music became a great comfort for Hagar. Reflecting on his childhood, he reveals, "We never owned a home, first of all. We always rented. [My father] couldn't pay the rent. He'd be in jail. My mom couldn't pay the rent. So we'd go campin'. We'd live in a tent and stuff… I didn't think we were havin' a hard time until I really started growin' up and seein' what other friends had. And then I started to realize I was really poor… So, I kinda got down and out. And then I started playin' music. Lookin' back, I can't believe I made it. And it's the thing that makes me so happy, why I go around smiling all the time."

As an entrepreneur, Hagar has enjoyed tremendous success away from the stage — so much so, that he was invited by Warren Buffett to speak at the billionaire's G.E. Summit. While he has invested in everything from sprinkler systems to apartment complexes, Hagar is, perhaps, best known for creating the Cabo Wabo brand and $100 million Cabo Wabo tequila business. Explaining how he got involved in the industry, he says, "I went to Mexico and bought a place in Cabo San Lucas in 1983… When I was down there, the tequila was different than what I was drinkin' in America… [I said] 'Man, this was the best tequila I've ever had in my life. Could you make it for me, guys?' He tells my interpreter, 'You bring me the bottles, and I'll fill 'em up for you.' Like that. That simple. And that's how Cabo Wabo started. It was so unbelievably organic."

In one of the episode's many highlights, Hagar gets personal with a special performance of his new song "Inner Child", which he performs for the first time on "The Big Interview". Explaining what it means to him, he says, "It's really hard for me to sing that song , because it's very deep. It's about me. It's about my kids, about my grandkids, about my mom and dad… I've found out that all my problems are being caused in life by my inner child. That little guy that was hurt as a child, and felt those things. Even though I've accomplished everything and more than I could have ever dreamed, that little guy is still stirrin' around in there… I don't think we ever get rid of it… And I like that little guy. I've decided that I like that little guy." 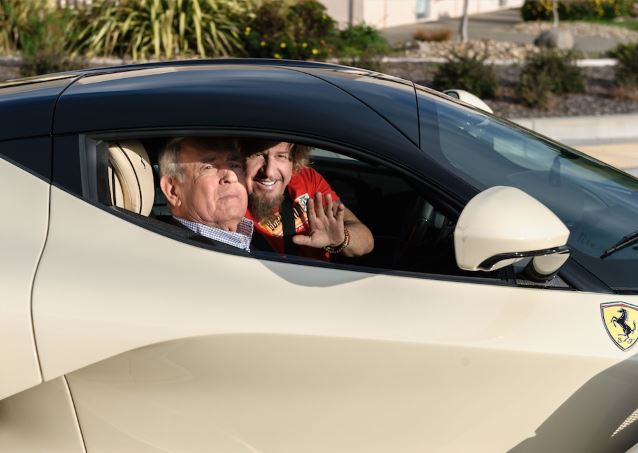