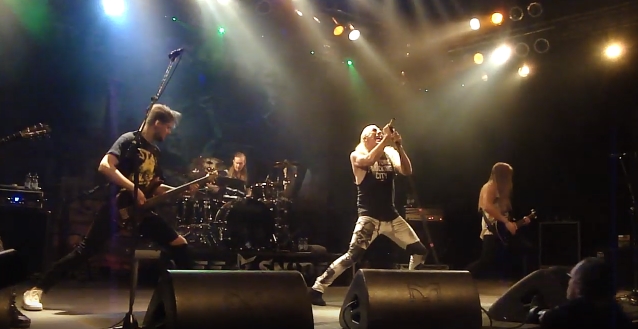 Fan-filmed video footage of Dee Snider's December 5 performance at Pakkahuone in Tampere, Finland can be seen below.

Snider recently said that the decision to end TWISTED SISTER was partly motivated by his desire to go out while he can still put on a great show.

Speaking to "The Animal House Radio Show" about TWISTED SISTER's retirement, Snider said: "Look, nobody beats gravity. Show me anybody in the history who's beaten gravity. Everybody gets pulled down sooner or later. What did Dirty Harry say? 'A man's gotta know his limitations.' I feel I know things are wearing out — they're wearing out. And I'm in great shape, I stay healthy, but you can't beat gravity."

He continued: "One of the things that prompted me, and this is not a slight on SLAYER or Tom Araya in any fashion, but it was very disturbing. I read a review and it said, 'And Tom talked about the fact that he can no longer headbang onstage, 'cause he's literally damaged his neck.' And he says, 'I defined myself as the guy who thrashed onstage as hard as the audience, and now all I can do is stand there and groove.' And I said, 'That's what I don't want to happen.' I wanna get off the stage while I'm still [able to do what I am known for], and I was, throwing my body on the floor, crawling around, headbanging, thrashing. I'm out there performing [and] I don't do those things anymore, because it's like an athlete — you damage your stuff. But to be up there and to feel that… I just felt his pain, saying, 'I defined myself by thrashing and I can't do it anymore. And I'm still up there.' And it hurt me to hear him say it. And I said, 'I can't have that be me."

Snider, who released an acclaimed solo album called "For The Love Of Metal" this past July, went on to say that he has no desire to hit the road with the same intensity as he used to back in TWISTED SISTER's heyday. "People are asking me, 'Hey, 'For The Love Of Metal', are you gonna do a full tour? And I'm, like, 'No!'" he said. "And they're, like, 'What do you mean 'no'?' I said, 'Are you kidding me? I'm not getting back on the bus or the van.' 'Well, THE [ROLLING] STONES are doing it.' They've got private jets. They set up camp in the Alsatian mountains somewhere in France, in a big estate, and they fly out for each show in a private jet. I mean, somebody wipes their freakin' ass, for god's sake. If you're on that level, awesome. But getting back and going city to city to city to city — no! It's not happening."