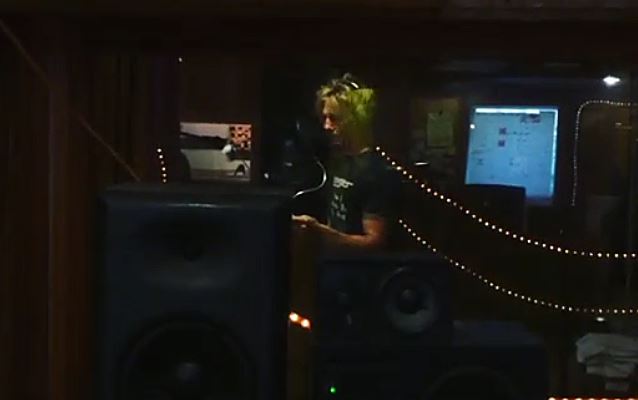 A couple of video clips from the studio can be seen below.

Speaking about his recent three-song EP, titled "How To Be A Man", which features a guest appearance by former GUNS N' ROSES axeman Izzy Stradlin, Duff told the Rock It Out! Blog: "I had a really good time just creating… I've played on a bunch of Izzy records over the last fifteen years, and it was just really nice to be in the studio with him for a couple of days. I really trust whatever he does. If he says, 'I've got a bridge. I've got a part,' I know he's got a part. It's not, like, 'Oh, let me hear it.' It's, like, 'Okay, he's got the part. Good. That's taken care of.' And, yeah, I'd like to do more music with him — always; for the rest of my life."

"How To Be A Man" is a companion piece to McKagan's new book, "How To Be A Man (And Other Illusions)", both of which were released on May 12. The EP also features contributions from ALICE IN CHAINS guitarist Jerry Cantrell, STONE SOUR drummer Roy Mayorga and drummer Taz Bentley.

The "How To Be A Man" book is the follow-up to McKagan's critically acclaimed New York Times best-selling memoir "It's So Easy (And Other Lies)".

Among the topics in the book are communication in relationships, albums men should listen to, and world travel tips such as "Don't smoke crack on a leased private jet — the smell gets into everything."

McKagan said that the book is a spinoff of a column with the same name that he wrote at Seattle Weekly for five years. He described the book as "a how-to guide of things I've learned about life — being a dad, being a husband and being in a rock band."

Recording session. #NewDuffMcKaganAlbum With Jeff Rouse as your host.