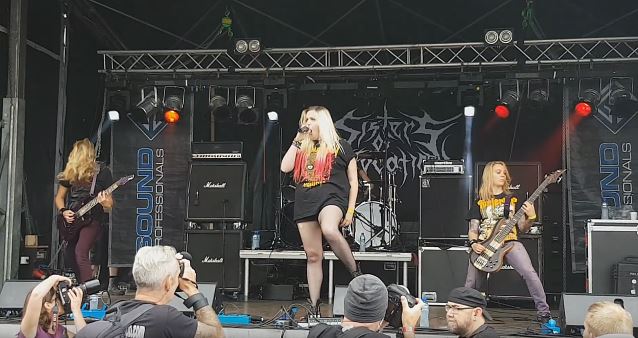 Video footage of the Dutch all-female death/black metal band SISTERS OF SUFFOCATION performing on July 30 at the Stonehenge festival in Steenwijk, The Netherlands can be seen below.

It has always been a dream of vocalist Els Prins to start an all-female death metal band, but she didn't seem to be able find the right group of girls to make this dream reality — that is, until she met guitarist Simone van Straten. Sharing a love for extreme music, they recruited drummer Amber de Buijzer and bass player Marjolein van den Nieuwenhuizen and started rehearsing. They released their first single, "Boundaries", in July 2014 and played their first show one month later. In May 2015, Marjolein exited the band and was replaced by Puck Wildschut.

Earlier this year, SISTERS OF SUFFOCATION finally went into the studio in Antwerp to record "Brutal Queen", and the first pressing is already sold out. Hammerheart Records will reissue this EP on digi-CD (September) and on LP (November),with slightly different artwork.

The band is scheduled to perform as a support act for LEGION OF THE DAMNED this autumn. Meanwhile, SISTERS OF SUFFOCATION will begin work on their debut album, which is scheduled for release in the second half of 2017.

SISTERS OF SUFFOCATION is: