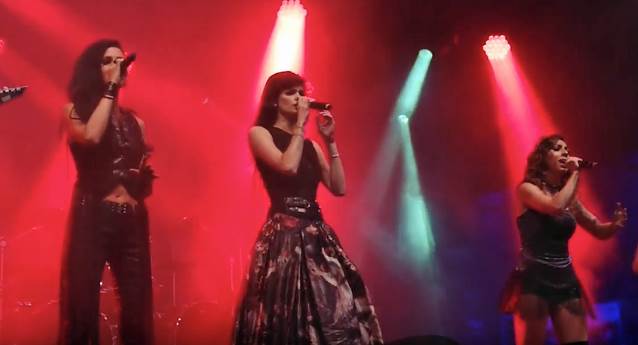 Fan-filmed video footage of EXIT EDEN's August 2 performance at the Wacken Open Air festival in Wacken, Germany can be seen below.

Amanda Somerville was unable to join her EXIT EDEN bandmates at Wacken because she was looking after her recently born twins.

She wrote after the gig: "So proud of my EXIT EDEN ladies making things even hotter at Wacken Open Air! Sorry I couldn't be there with everyone on stage, but my heart still beats along!"

EXIT EDEN's debut album, "Rhapsodies In Black", was released in August 2017 via Napalm Records (worldwide excluding Germany, Switzerland and Austria, where it was made available via Starwatch). The disc was described in a press release as "a colorful mix of international super hits from Rihanna to Madonna, from DEPECHE MODE to Adele."

Marina La Torraca: Hailing from Brazil, Marina was born with rhythm in her blood. As the auspicious frontwoman of several metal bands since the age of 15, her path led her to Europe, where she got to perform with AVANTASIA and to found her up-and-coming band PHANTOM ELITE. Since having studied musical theater in New York, the versatile singer and actress can also be seen internationally in musical productions, including the German tour of the Broadway hit "Rent". For her, being close to the crowd is what counts — no problem for her and her natural convincing character.

Clémentine Delauney: Clémentine was born near Paris. She has been a multi talent since her childhood days — no matter if she was dancing, playing the piano or singing, she enchanted her audience. At the age of 16, she joined her first metal band. She is currently fronting symphonic metal outfit VISIONS OF ATLANTIS and also worked with SERENITY and MELTED SPACE. Another one of her career highlights is her participation on Kai Hansen's (HELLOWEEN, GAMMA RAY) first solo album, released in 2016. Thus, Clémentine has carved her way into being one of the great performers of the scene.