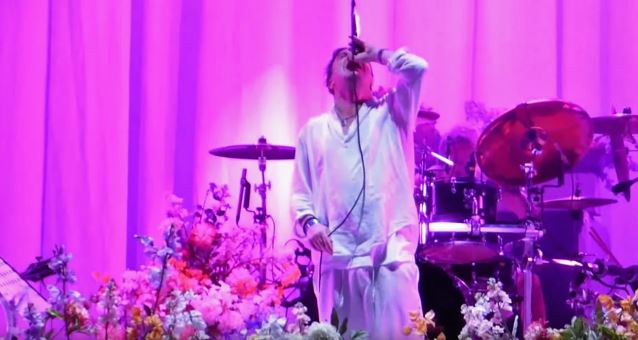 Fan-filmed video footage of FAITH NO MORE's August 8 performance at the Heavy Montreal festival in Montreal, Quebec, Canada can be seen below.

"Sol Invictus", FAITH NO MORE's long-awaited follow-up to 1997's "Album Of The Year", sold around 31,000 copies in the United States in its first week of release to land at position No. 14 on The Billboard 200 chart (which includes stream activity). The CD was released on May 19 via the band's newly formed imprint Reclamation Recordings, which is distributed by Ipecac Recordings.

Regarding FAITH NO MORE's musical approach on "Sol Invictus", bassist Billy Gould said: "What I can say is that I think through our experience as musicians over the years, I think what we're doing reflects where we've gone since we made our last record as FAITH NO MORE. I think this kicks things up a notch. And I think there's parts that are very powerful and there's parts that have a lot of 'space.' Everything we do, with our chemistry, the way we play; it's always going to sound like us. It's just what we do, that makes us feel good."

Asked if FAITH NO MORE wanted to retain creative control by deciding not to align itself with a major label for the release of the band's comeback album, "Sol Invictus", Gould said: "Well, yes, kind of. We were free. We didn't have to go to a major, and we could kind of call our own shots and do it how we wanted to. And I think it just took all the edge off these other things and these details that we had to do that, when you add other people into the mix, you're getting pressured, you're getting asked to do things you don't wanna do. Also, one of the things it took us so long to think about making a new record is because it's not just making a record; it means you're gonna have to tour, it means you're gonna have to start doing press, it means you've gotta start doing all this. There's a lot of shit that comes with that. And when you do it with a major, there's nobody that you can talk to about accountability as far as... I don't know… something simple, like, 'You want us to do a video? Who wants us to do a video?' 'Well, the guy down in that office down there.' I never met him before. In this kind of situation we have here, we know everybody, we can talk to everybody. And it's, like, 'We need this video. We need it for this.' 'Okay. Let's make it happen.' And we know that the content that comes out of is our content, how we want it, and not some guy in an office who thinks they know who we are who's giving this in front of all these people and embarrassing us, for example. Which happened a lot, actually. Even though we had a great label back in the day, but it's an office of people who are not in our band, who [don't] know us as well as we know ourselves."