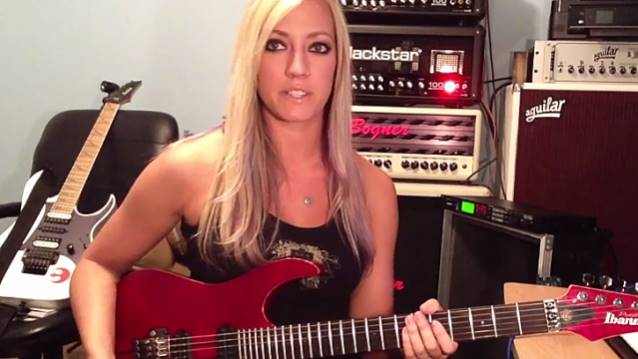 All Axess has uploaded a couple of video guitar lessons from THE IRON MAIDENS' Nita Strauss, who recently joined Alice Cooper's touring band. The first lesson is in improvisation in the key of "A" major. The breakdown of the lick allows different approaches and voicing of playing the first 8 notes of the "A" major scale; one is two notes per string and one is three. Nita showcases an interpretation of the scale from a traditional perspective to a more "shred" approach. In the second lesson, Nita shows you how to play a descending tapping run that utilizes pedalling off the 3rd and 5th of the scale.

Strauss, who replaces Orianthi in Cooper's band, said that she was "honored and excited" to have been chosen to tour with the legendary rocker.

Strauss, a longtime Ibanez signature series endorsee who made her name with THE IRON MAIDENS, FEMME FATALE and LA Kiss, will hit the road with the rest of Cooper's band — guitarists Ryan Roxie and Tommy Henriksen, plus bassist Chuck Garric and drummer Glen Sobel — this summer.

Asked how she got involved with Cooper, Strauss told GuitarWorld.com: "Kip Winger was the one who actually connected the dots. We met each other on the Monsters Of Rock cruise, where he saw me play. He later heard through the grapevine that Alice was looking for someone, so he sent them a few links and videos of me performing. I was then introduced to Shep Gordon [Cooper's manager] and Bob Ezrin [Cooper's producer] who sent me over a few tracks to learn and from there. Everything just seemed to fall into place. I'm so honored and excited to be a part of this project. It's hard to put into words."

Regarding what it was like when she first met Alice, Nita said: "I first met Alice in L.A. when he was recording some material for his new album. Ezrin called and asked me if I'd like to come down to the studio and meet him. So I went down and got to sit in the studio for Alice's recording session. He's such a cool guy. The whole experience was pretty incredible."

Strauss also spoke about Cooper's upcoming road trek, which will see Alice's band supporting MÖTLEY CRÜE on the latter act's "The Final Tour". "For the tour, we'll be doing 72 cities beginning with a few warmup shows in Michigan and then joining up with the CRÜE on July 2," she said. "We have a little break in September and then go back out until mid-November."

Asked if she feels added pressure being in a three-guitar band situation, Strauss said: "I come from a band that played IRON MAIDEN songs, so the multi-guitar-player thing isn't something that's really new to me. By the same token, these are iconic songs and I really want to make sure that I do them justice."