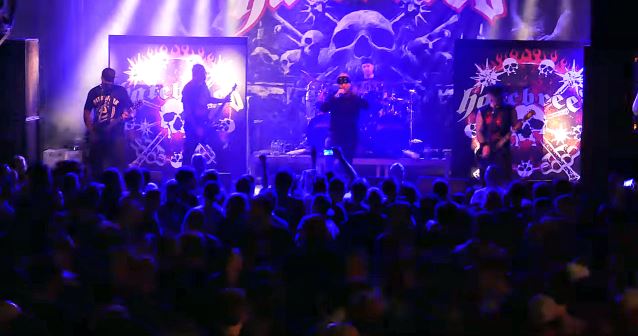 Fan-filmed video footage of Connecticut-based hardcore/metal masters HATEBREED performing a brand new song, "A.D.", on May 6 in Vienna, Austria can be seen below. The track is taken from the band's new album, "The Concrete Confessional", which will be released on May 13 via Nuclear Blast Entertainment. The follow-up to 2013's "The Divinity Of Purpose" was produced by longtime collaborator Chris "Zeuss" Harris (ROB ZOMBIE, SUICIDE SILENCE, WHITECHAPEL) and mixed by Josh Wilbur (LAMB OF GOD, MEGADETH). The artwork was created by Marcelo Vasco (SLAYER).

A number of tracks provide a pragmatic look at issues that have become front-and-center in today's New Normal, and "A.D." is a case in point. Reflecting what is today a challenging time, it's a song that fuses together frustration with torrential thrashed-out guitars, double bass drums, and Jamey Jasta's immortal growl.

"'A.D.' was a way that I could voice my frustration about the loss of opportunities available to the average guy," said Jasta. "With the government and big business drowning in corruption and greed, the average person is being squeezed, so achieving the American Dream is becoming less and less real.

"We all need to pay closer attention to what our elected leaders are doing," Jasta added. "Start locally, in your own community, make your representatives accountable."

"A.D." is now available as an instant-grat track when "The Concrete Confessional" is pre-ordered on iTunes.

Regarding the "The Concrete Confessional" artwork, Jasta said: "I think da Vinci said it best when he said painting is poetry that is seen rather than felt, and poetry is painting that is felt rather than seen. Marcelo was able to capture a feeling that will accompany our musical and lyrical vision and he put together a striking piece that speaks volumes."

HATEBREED's last album, "The Divinity Of Purpose", sold 17,000 copies in the United States in its first week of release to land at position No. 20 on The Billboard 200 chart. 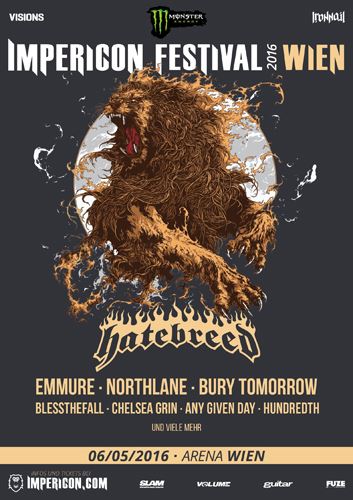