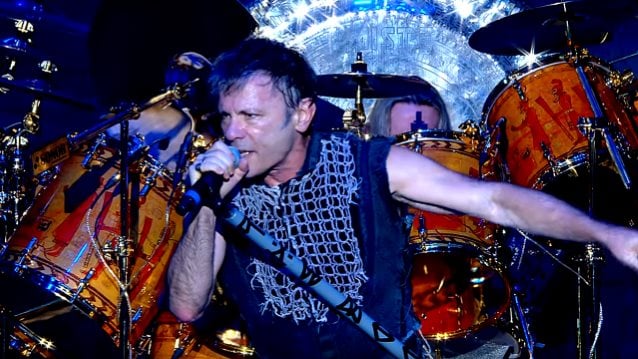 IRON MAIDEN frontman Bruce Dickinson berated an unruly fan during the band's May 12 concert at Adelaide Entertainment Centre in Adelaide, Australia as part of their "The Book Of Souls" world tour.

At the end of "Fear Of The Dark", the eleventh song of MAIDEN's set, Bruce addressed the fan directly, telling him: "To the gentleman in the front with the Raiders shirt on. Yeah, you, yeah, you, being restrained by a couple of very friendly fans. Just fucking calm down, all right, will ya? Otherwise… Yeah, you. Otherwise you will be exiting. Pick a window. I hope you like hospital food. You, yeah. Give me the fucking finger, mate. You fucking come backstage and I'll fucking sort you out myself. Cunt!"

The incident can be seen in the video below.

One fan who attended the concert reported: "I was standing about one metre away from said cunt. Had a cut on his eye and someone ripped his shoe off and threw it on stage as security dragged him over the barrier."

Another concert-goer added: "I was there, and it happened right in front of me.

"So me and my friend were just enjoying the concert, then this guy (who Bruce yells yet) pushes in front of us. He had a Raiders shirt on and looked to be in his mid-40s. He was certainly drunk or on something, considering he could barely stand up straight.

"Now I've been to many concerts, and it's pretty common for someone to push in front of you, so we just kind of rolled our eyes and continued to enjoy the concert. Some bald guy in front of him turned around and said something to him that just set him off. This guy with the Raiders shirt went off and started hitting this bald guy. The bald guy pushed him into me and my friend, he went back at it with the bald guy which escalated into a fight. Three people were trying to restrain this crazy Raiders shirt guy and eventually someone with long hair managed to restrain him before it continued. Bruce stopped the song and said all the things you hear in the video. Eventually the security got him and kicked the douche out in which the show carried on.

"It was a great night, and it's nice to see that assholes like this get kicked out so everyone else can enjoy the show rather than have one douche ruin it for everyone else."

Support on the trek is coming from THE RAVEN AGE, the band led by Steve's son George Harris.

"The Book Of Souls" was released worldwide on September 4, 2015 through Parlophone Records (BMG in the U.S.A). The CD was recorded in Paris, France with producer Kevin "Caveman" Shirley in late 2014, with the finishing touches added last year. 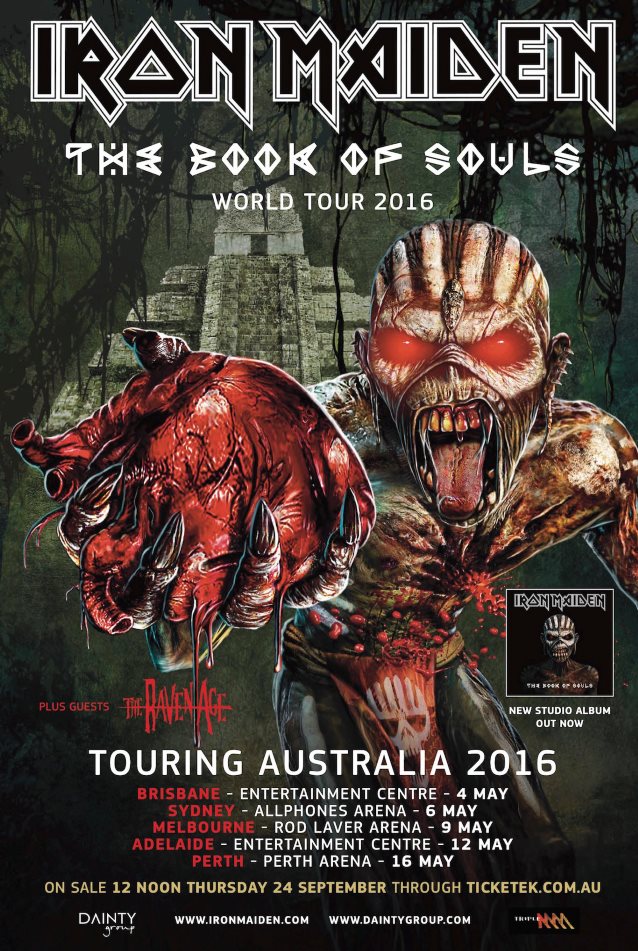