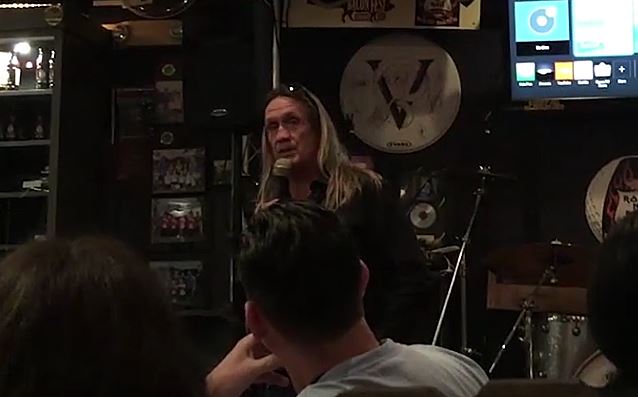 Before "The Book Of Souls" was played, McBrain talked to the crowd about the record, the band, and more. Video footage of the event — courtesy of 98.7 The Gater — can be seen below.

IRON MAIDEN bassist Steve Harris told Kerrang! magazine about the song: "I think it's a masterpiece, actually. I think I can say that because I didn't write it! It sounds like MAIDEN, but it's totally different from what we've done before."

He continued: "Eighteen minutes sounds like a long time, but it's actually such a journey that… Well, it's best just to leave people to listen to it and see what they think. But it's very interesting. It's certainly not boring."

"I think you'll see on this album that there's lots going on. There's a hell of a lot to take in. I think there'll be bits and pieces that will hit people initially, but I think they're going to need a few listens. It's a long album. I think it's a really interesting album. Hopefully other people will think it's interesting as well."

"Whenever we do a new album, we always go out with a new stage show; that's exciting in itself," Harris said. "We always feel like every show is sacred these days anyway, and I suppose even more so now after the scare with what's happened with Bruce. It makes everything more important to us."