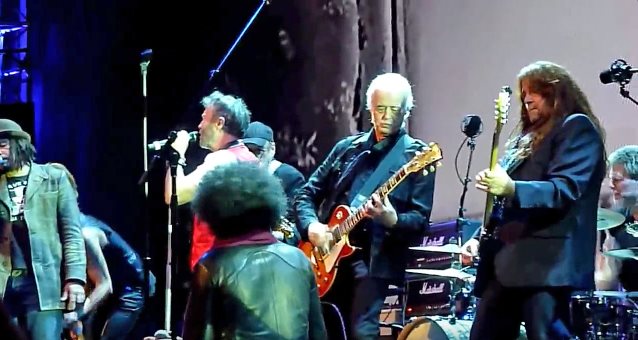 According to RollingStone.com, the vocals were handled by Paul Rodgers (Page's old bandmate in THE FIRM),ALICE IN CHAINS singer William DuVall and John Hogg, with additional guitar power provided by SOUNDGARDEN's Kim Thayil and CHEAP TRICK's Rick Nielsen, among others. The house band featured a rhythm section made up of former GUNS N' ROSES bassist Duff McKagan and ex–SCREAMING TREES drummer Barrett Martin.

Page picked up the EMP Founders Award at the ceremony, which featured performances of other ZEPPELIN classics "Immigrant Song", "Communication Breakdown" and "Dazed And Confused".

Page said last year that he wanted to hit the road, but told England's The Week that he's still hadn't secured the band to take on tour. "I know people want to hear me play," he said. "I want to hear me play, too… I'm really starting to get myself enthused and limbered up for putting something together… That for me is exactly how things should be. I want to surprise people. I'll play everything, and some new music I've got. Next year is the time when I should be seen to be playing live."