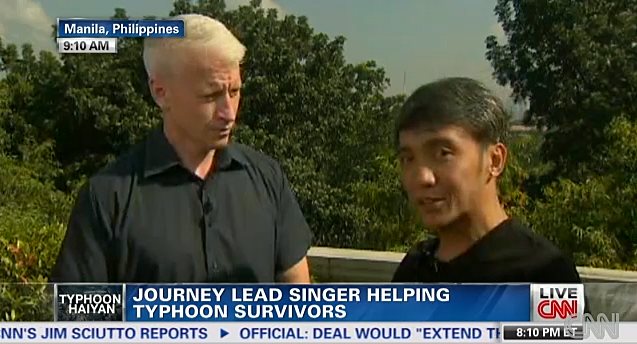 Pineda spoke to CNN's Anderson Cooper about doing whatever the musician can — with his foundation and the band — to help raise money and awareness and help the typhoon survivors. "You don't have to be a hero… these poor people, they don't deserve to have something like this," Arnel said.

Check out the report below.

"Don't stop believing, help is on the way for the people of the Philippines," said Arnel Pineda, who is leading the efforts to mobilize the coalition of partners. Pineda, based in Manila, planned to meet with World Food Programme's executive director Ertharin Cousin at WFP's Philippines headquarters in Manila to announce the donation.

The largest storm to ever make landfall, Super Typhoon Haiyan caused catastrophic damage, with more than 615,000 people displaced. When disaster strikes and hours can mean the difference between life and death, the UN World Food Programme is among the first on the ground to provide life-saving assistance.

JOURNEY is calling on fans to join them and make urgent donations to support life-saving food relief for millions of Filipinos. Donations can be made at www.wfpusa.org/journey or by texting the word AID to 27722 to instantly donate $10.

WFP's efforts will ensure that 2.5 million people receive food, logistics and emergency telecommunications over the next six months. More than 170,000 people have received WFP rice rations to date, as part of family food packs from WFP handed out by the Department of Social Welfare and Development. Aid is also beginning to reach more remote locations, with distributions of High Energy Biscuits made in 20 communities on Friday. Life-saving HEBs are used in emergencies because they are nutritious, light to transport and need no cooking.

"We're honored to have JOURNEY's support and Arnel Pineda's leadership on this incredible donation for WFP's emergency relief in the Philippines," said Hunter Biden, Board Chair of World Food Program USA. "Their support is going to make a real difference for so many Filipino children and families in need."

WFP crosses the world's toughest terrain to get food to the people who need it most, no matter what it takes. As the largest humanitarian organization in the world, WFP feeds more than 97 million people in 80 countries last year. Funded entirely by voluntary donations, WFP counts on ongoing support to be able to provide food where and when it is needed most.