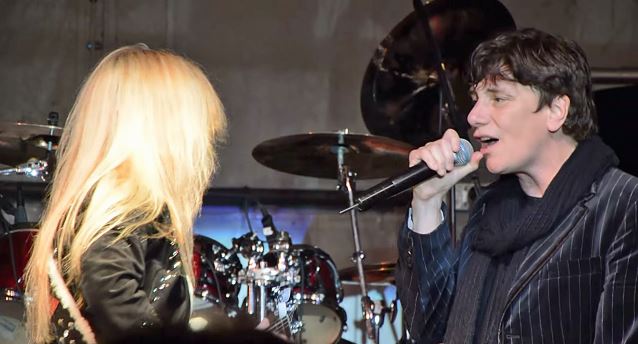 SCRAP METAL was created by Gunnar Nelson, who, with twin brother Matthew Nelson, was half of the hit '90s group NELSON, and Mark Slaughter of '80s rock group SLAUGHTER.

Lita in 2012 revealed that "Close My Eyes Forever" came about by accident during a night of drinking and getting stoned when she was being managed by Ozzy Osbourne's wife, Sharon. She recalled to Metal Underground: "'Close My Eyes Forever' was a mistake. It was just me and Ozzy and Sharon hanging about in the recording studio. They showed up one day and had a housewarming present for me: a life-size duplicate of Koko, the gorilla from the San Diego Zoo. It was freaking huge — I had to strap it in the front seat of my jeep to get it home. Ozzy stayed, Sharon got bored and left, and me and Ozzy had a couple of drinks and we were jamming. We started singing, messing about and we wrote 'Close My Eyes Forever'. Next thing I knew the sun was coming up. I looked at him and went, 'Uh-oh, we're in trouble.' Sharon had been waiting all night. We were a long way from where Ozzy had to go. He said, 'Can you drive me home?' I said, 'No, I can't.' We were stoned out of our minds. He got into a cab and I strapped Koko into my jeep and drove home — just barely made it. And then we had this hit song."

Dey Street Books (formerly It Books),an imprint of HarperCollins Publishers, has set a February 23, 2016 release date for "Lita Ford - Living Like A Runaway: A Memoir". In this 272-page hardcover book, which was originally expected last year, the former lead guitarist of THE RUNAWAYS opens up about the '70s and '80s music scene, and her extraordinary life and career.

In a January 2014 interview with PureGrainAudio.com, Ford stated about her upcoming book: "It's an autobiography about, well, my life, the paths I've taken, all the different musical eras. It's got all my favorite stories in it and we're just working on getting that together. It covers everything really from me growing up to THE RUNAWAYS to Lita and all the things I've been through and experiences I've had."