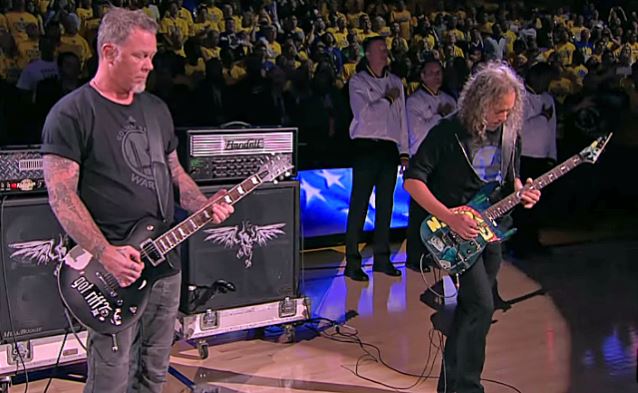 Video footage of their appearance can be seen below.

Prior to the event, METALLICA said in a statement: "We're incredibly lucky to have another winning team here in the Bay Area as the Golden State Warriors took the NBA Western Conference title and are facing the Cleveland Cavaliers in the NBA Finals. By now we're guessing that you've noticed that we like to support our home sports teams, so to continue in that tradition James and Kirk will be on hand at Game 5 on Sunday, June 14th. They'll be performing the National Anthem before the game as the Warriors resume their quest for the title back at home at Oracle Arena in Oakland, CA that night. Tune in to your local ABC station to watch the performance live, game time is 8:00 PM Eastern and GO DUBS!"

METALLICA currently has 10 dates on its calendar between now and mid-September, including this year's edition of Lollapalooza, which will take place at Grant Park in Chicago, on July 31, August 1 and August 2.

METALLICA has made available for purchase a limited-edition box set containing 50 CDs that chronicle the band's tours of Australia and New Zealand in 2010 and 2013. The set features recordings of 62 different METALLICA originals and covers from 25 different shows, each on two discs, and retails for a hefty $395.

Despite insisting that work has been proceeding on a new CD, METALLICA has spent a lot of time outside the studio in the last year, with activities that included a string of European all-request shows last summer, a week-long residency on "The Late Show With Craig Ferguson", and a Rock In Rio USA stint.