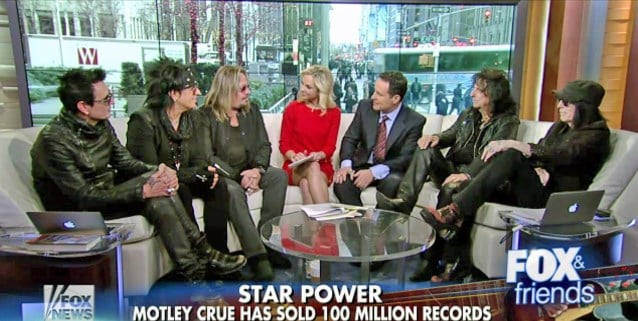 MÖTLEY CRÜE and Alice Cooper appeared on January 20 edition of the Fox News morning show "Fox & Friends" to announce the date of CRÜE's last show ever. You can now watch the segment below.

"The Final Tour" kicked off last year and will end New Year's Eve at the Staples Center in Los Angeles after one more round of North American gigs. Because of higher ticket demand, some cities will see them twice. CRÜE said in a statement, "In some of the cities, we could only reach a fraction of the fans who wanted to come see us play last year, so we're coming back to those places."

Cooper will open all the shows.

When their upcoming retirement was announced last year, the CRÜE actually signed a legal contract saying that they could not go back on their agreement to cease touring.

To coincide with the announcement of the last show, the band released a new video, "All Bad Things", which includes clips from throughout their career.

Dates for 2015 will include five shows in Japan, a tour of Australia and New Zealand, European festival shows, and summer shows in the U.S., Canada and Mexico.