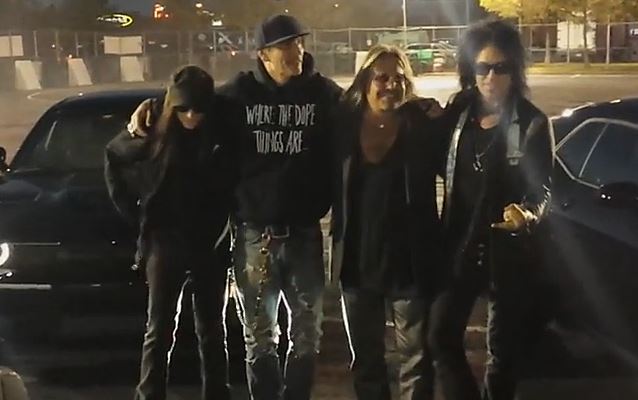 More than 850 Dodge owners from across the U.S. and Canada converged on Dallas on Saturday, November 1. The reason: To revel in the power and performance of Dodge, help launch the latest business in the growing empire of Gas Monkey Garage's Richard Rawlings and celebrate Dodge's 100th anniversary with a private concert by legendary rock band MÖTLEY CRÜE.

Check out video footage below.

Owners of any classic or newer model Dodge Charger, Challenger and Viper were invited to register at www.dodgerocksgasmonkey.com to show off their vehicles at this one-and-only car show and concert. The event was free, as the $100 vehicle deposit due at registration was refunded on site. The car show package included up to two general admission passes to the event and concert at what most likely was the most intimate venue MÖTLEY CRÜE has played in decades.

At the car show, Dodge showed the new 2015 Dodge Charger SRT Hellcat — the fastest, most powerful sedan in the world, with an NHRA-certified quarter-mile elapsed time of 11.0 seconds — and the 2015 Dodge Challenger SRT Hellcat, the fastest and most powerful muscle car ever. Both have a 707-horsepower, 6.2-liter supercharged HEMI V-8 engine. Additional Dodge and SRT vehicles, such as the 2015 Challenger Scat Pack, Charger R/T, Dart GT, Durango R/T and Viper GTS, also was on display.

After first using MÖTLEY CRÜE's hit single "Kickstart My Heart" in three 30-second commercials for the Charger and Challenger, Dodge partnered with the band earlier this year to present MÖTLEY CRÜE's "The Final Tour" which kicked off in North America July 2 and runs through November 22 before the tour continues overseas in 2015.