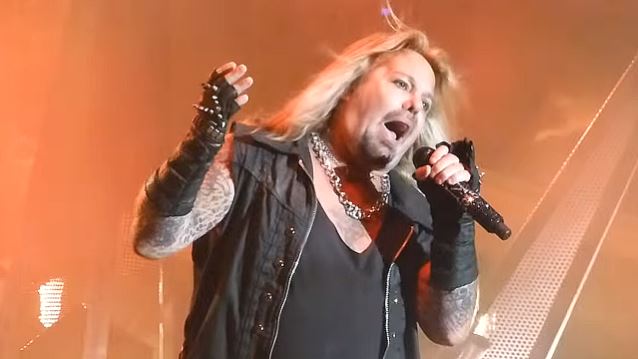 According to TMZ.com, MÖTLEY CRÜE singer Vince Neil is the subject of a criminal investigation after allegedly attacking a woman in a Las Vegas hotel.

The incident reportedly took place at around 5:00 p.m. Thursday (April 7) at the Aria hotel where the woman approached actor Nicolas Cage and asked him an autograph. Vince then allegedly got behind the woman, grabbed her by the hair and pulled her to the ground.

TMZ.com has posted video footage of the end of an altercation between Neil and Cage. The 26-second clip apparently shows the 52-year-old actor trying to restrain Neil and calm him down after taking him outside the hotel to a waiting car. Cage can be seen screaming at the 55-year-old singer, imploring him to cool off. Nic can be heard yelling at Vince, telling him to "stop this shit now." But by the end of the clip, Neil appears to say "I love you" to Cage. Both men also look intoxicated in the video.

The Las Vegas Metropolitan Police Department told TheWrap.com that Neil was cited for battery Thursday evening, after a call came in from the hotel at 5:24. A female made a report to the police that Neil approached her, grabbed her by the hair and jerked her to the ground.

Neil was released at the scene, police said, and is scheduled to appear in court on June 17 for the alleged assault on the woman.

The night before, Vince was was seen checking out the newly opened T-Mobile Arena in Vegas with friends, including former "Lifestyles Of The Rich And Famous" host Robin Leach.

Cage and Neil are longtime friends who were previously photographed together at the rocker's strip club back in 2012.