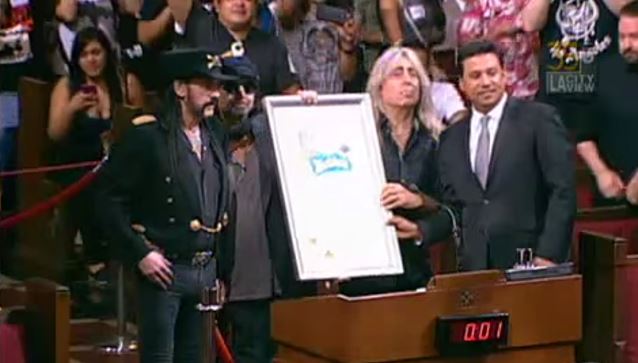 Grammy Award-winning iconic rock band MOTÖRHEAD was honored by the Los Angeles City Council on Wednesday, August 26 in celebration of the band's 40th anniversary and the release of the group's new album, "Bad Magic". Councilmember José Huizar conducted the honor, which took place at 10:00 a.m. at the Council Chambers at City Hall.

Video footage of the event can be seen below.

Huizar said (transcribed by BLABBERMOUTH.NET): "We are here today to honor MOTÖRHEAD's 40th anniversary. It's about honoring music in the city of Los Angeles and MOTÖRHEAD's place in that history.

"This year signals the 40th year of MOTÖRHEAD's triumphant existence, something which will be celebrated throughout the rest of 2015 and 2016. They will tour the world once more and show that if it's too loud, you're too old.

"Throughout the 40 years, this is a band that stuck to its artistic guns and has never been interested in musical fads and trends, the kind that happen in every generation.

"MOTÖRHEAD has chosen to lose themselves in their music.

"Lemmy and company have stayed true to their own vision and execution of incredibly mesmerizing and thundering, feel-it-in-your-gut rock and roll.

"Lemmy lives here in Los Angeles, and the band has recorded a number of albums here. He's an Angelino; he calls Los Angeles home. And they will be releasing their latest album, 'Bad Magic', which comes out this Friday. We're all looking forward to it, right?

"They are the precursor to the 1970s with the British invasion of heavy metal. They set a trend, and they have had hits like 'Motörhead', 'Ace Of Spades' — which is one of my top three songs of all time — 'Bomber', 'Iron Fist' and many, many others, and they have created a legacy that is hard to match. And here in the city of Los Angeles, home of many great influential rock bands — more than you can count — greats like GUNS N' ROSES and METALLICA have cited MOTÖRHEAD as a major inspiration for their sound. In fact, GUNS N' ROSES member Duff McKagan once penned a column titled, 'Without Lemmy and MOTÖRHEAD, there wouldn't be GUNS N' ROSES, NIRVANA or METALLICA. Period.' I couldn't agree more, and that's why we're here: to honor a band that continues to make brilliant music while inspiring other musicians here in Los Angeles and all over the world to play well, to play hard and to honor their own visions and rock and roll, just like MOTÖRHEAD has done for 40 years.

"Lemmy and crew epitomize what it means to live rock and roll, and fans from throughout the world continue to view MOTÖRHEAD as the torchbearers of that elusive music we call rock and roll. And who couldn't love a group that starts its live concerts with these words: 'We're MOTÖRHEAD and we play rock and roll.'"

Lemmy thanked Huizar and added: "Well said. As none of us are from Los Angeles, this is a very great honor. [Drummer Mikkey Dee is] Swedish, [guitarist Phil Campbell is] Welsh and I'm English. So… I came over here years ago, and I love it over here, so it's a great honor for me. Thank you."

Said Dee: "What can I say? I used to live here — eleven years. I moved back to Sweden in 1996. And this is great. We've been honored here and there for music in the music industry, but nothing like this before, so, of course, this is very, very special for us. So, thank you very much. It's great. We're gonna continue another 40 years — I hope."

Added Campbell: "It's just something you never expected to get — an honor like this. We enjoy playing our music and writing our songs, and this is unbelievable, so thank you very much."

Lemmy has lived in Los Angeles for 25 years. "Home is in here," he told The Independent, tapping his temple. "Where you live is just a geographical preference. I like it [in L.A.] because the sun shines a lot and you don't get the cynical fucking English bitching about everything. I find the Americans quite refreshing. Everybody sneers at the 'Have a nice day' thing but it's a lot nicer than having your change thrown at you."

In 2013, Lemmy underwent an operation to implant a cardioverter-defibrillator into his chest, a device that helps prevent an irregular heartbeat turning into no heartbeat. Then, shortly afterwards, he suffered a hematoma. Earlier this year, MOTÖRHEAD was forced to cancel shows after he suffered a gastric illness.

Lemmy has cut back on booze and cigarettes — he's down to a pack a week, and has swapped from Jack and Coke to vodka and orange, apparently to help with his diabetes.