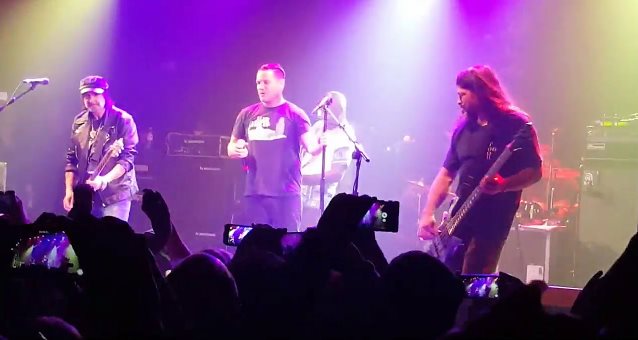 MOTÖRHEAD guitarist Phil Campbell joined MASS MENTAL on stage on March 13 at the Electric Ballroom in London, England to perform a couple of MOTÖRHEAD classics. Fan-filmed video footage of his appearance can be seen below.

In a 2014 interview with Rock Cellar Magazine, Trujillo stated about MASS MENTAL: "MASS MENTAL is a collective. It's a group of musicians who really connect with the funk — old-school, in-your-face funk. A lot of it is pulled from the '70s, believe it or not — Jaco, PARLIAMENT FUNKADELIC, and so on. Armand Sabal-Lecco I've known since 1994.

"We've been doing MASS MENTAL since 1994, on and off. We've probably done about five gigs in over 20 years, so… it's always a party. We did a show at the Whisky A Go Go a few months back. It's always a trip. You've got Ozzy Osbourne just hanging out, Stewart Copeland of THE POLICE, CYPRESS HILL is there, members of WEEZER… It's super-cool. It takes the weight off of anything high-profile. The pressure's off. It's all just about having fun, playing some kickass bass lines and movin' and groovin'."

He continued: "What people don't know about MASS MENTAL is… tracks have been recorded in the nineties, out in the countryside of England, out in Wales, even GENESIS's studio in the countryside, places where LED ZEPPELIN recorded. There's a lot of history to that collective.

"Benji Webbe, the singer of the band SKINDRED (who is in MASS MENTAL),he was a part of one of my favorite groups out of England, DUB WAR. They're now somewhat defunct, but man, they were good."