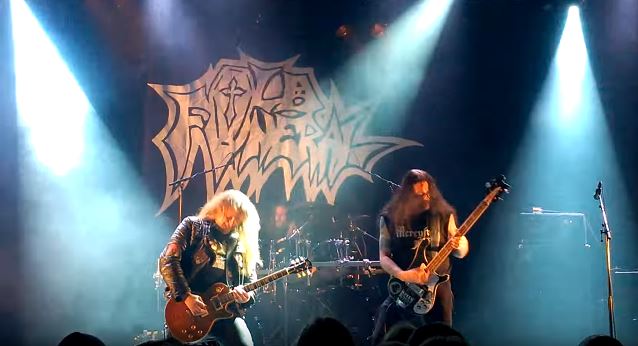 The original lineup of the Norwegian cult black/death metal band OLD FUNERAL reunited for a short set on November 15 at the BlekkMetal event in Bergen, Norway. Joining Olve Eikemo (a.k.a. Abbath; ex-IMMORTAL) on bass/vocals were Tore Bratseth on guitar and Padden on drums.

OLD FUNERAL played the entire "Abduction Of Limbs" demo, which is said to be the first metal release to ever have been recorded at the legendary Grieghallen Studios in Bergen. They closed out their set with a cover version of CELTIC FROST's "Procreation Of The Wicked".

A performance clip of the song "Annoying Individual" from the "Abduction Of Limbs" demo can be seen below.

In existence from 1988 until 1992, OLD FUNERAL was one of the earliest bands in the Norwegian extreme metal scene. Influenced by such acts as CARCASS and MORBID ANGEL, the group's lineup also included Kristian Vikernes (a.k.a. Varg Vikernes; BURZUM) on guitar and Harald Nævdal (a.k.a. Demonaz; IMMORTAL) on guitar.