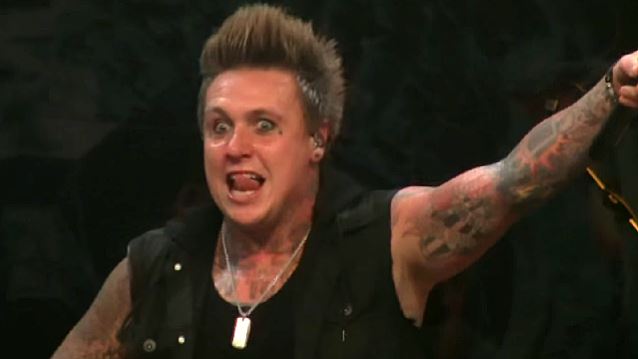 Fan-filmed video footage of Californian rockers PAPA ROACH performing the title track of their eighth full-length album, "F.E.A.R. (Face Everything And Rise)", last night (Wednesday, October 29) in Berlin, Germany can be seen below.

The official video for "F.E.A.R." will make its online debut on November 4.

The follow-up to 2012's "The Connection", "F.E.A.R. (Face Everything And Rise)" was recorded at Las Vegas' The Hideout Recording Studio, which is owned and operated by Canadian producer Kevin Churko. Churko has previously worked with OZZY OSBOURNE, FIVE FINGER DEATH PUNCH, IN THIS MOMENT and HELLYEAH. It will be released on January 27, 2015 via Eleven Seven Music.

As far as the title goes, the writing was on the wall — literally. "Jacoby [Shaddix, vocals] wrote 'F.E.A.R.' on the wall of the studio in spray paint," laughs bassist Tobin Esperance. "When we started the record, he was like, 'I want construction paper hung up on the walls everywhere so I can write down all of these thoughts.' That was the only thing he ended up writing on the wall. It stuck."