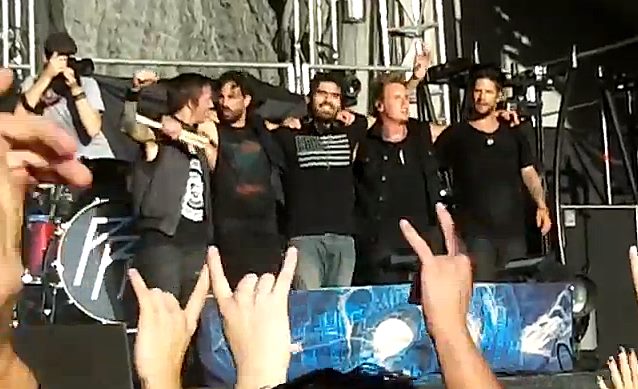 Ex-PAPA ROACH drummer Dave Buckner rejoined his former bandmates on stage on September 14 at the the Aftershock festival at Discovery Park in Sacramento, California to perform the song "Last Resort". Fan-filmed video footage of his appearance can be seen below.

PAPA ROACH was sued in 2008 by Buckner, who claimed that he had not been receiving his fair share of the group's earnings and that he had not received a complete accounting from the group or its management. Frontman Jacoby Shaddix told The Pulse of Radio in early 2009 that the suit was being settled, and that his feelings about Buckner had not been affected by it. "Legal is legal, you know, but it's like the essence of the lawsuit is to dissolve his business relationship with us, which is completely understandable," he said. "But as far as like personal goes, I, you know, we wish no ill will on him."

PAPA ROACH permanently split with Buckner at the beginning of 2008, following a year-long period in which he went to rehab twice. He was replaced by ex-UNWRITTEN LAW drummer Tony Palermo.