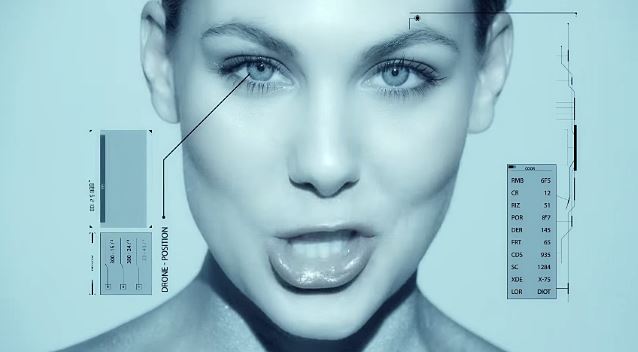 "Digital World", the new video from Swedish melodic metallers AMARANTHE, can be seen below. The song is taken from the band's third album, "Massive Addictive", which was released on October 21, 2014 via Spinefarm Records. The CD was tracked at Hansen Studios in Ribe, Denmark with producer Jacob Hansen (VOLBEAT, EPICA) at the helm.

"'Digital World' follows up the overwhelmingly successful 'Drop Dead Cynical', which charted high on radio and single charts all over the world, to our massive excitement!" the band said. "It has even been a staple song for the Detroit Red Wings NHL games! However, we're back with what is probably our best and most well-produced video to date, and most importantly a song that is already a fan (and band) favorite.

"We have extremely high expectations for 'Digital World'. It will also serve as the perfect prelude to our North American tour, which starts the same week."

Asked how it feels being the only woman in AMARANTHE, singer Elize Ryd told The AU: "Within the band, it's fine, because [the other members of the group] see me as their sister, you know? But sometimes we are very different, because I like to do different things than the guys do, so sometimes I feel very alone. And also, I feel that the women in metal always get objectified in a different way than the guys, and I think it's very unfair. I'm definitely a feminist in that perspective. It's usually the haters that write bad things about the women, and I think it's just wrong. Also, it's different for me than [someone like] Floor [Jansen from NIGHTWISH] because I am one of three singers in the band, and usually, when someone has a bad comment about the band or the sound, they usually put the focus on me, even though there are five other guys they could have criticized. I also read very, very, disrespectful comments that are focused towards me because I’m a woman — not because I'm an artist just like the other guys — so there is a difference. But I also get a lot of good critique. Mostly it's love."

Regarding how she stays positive in this business, Elize said: "I stay positive thanks to all the positive critique I get, and the love I get from so many fans. I have so many fans who I feel the most amazing love from, so it's thanks to them I get more and more strong. It's definitely the good responses that I'm sucking in, and all the bad stuff, I try to keep it outside my life. I still think it’s very important to actually point at people who are disrespecting you because you are a female. I don't have any patience or acceptance for it."