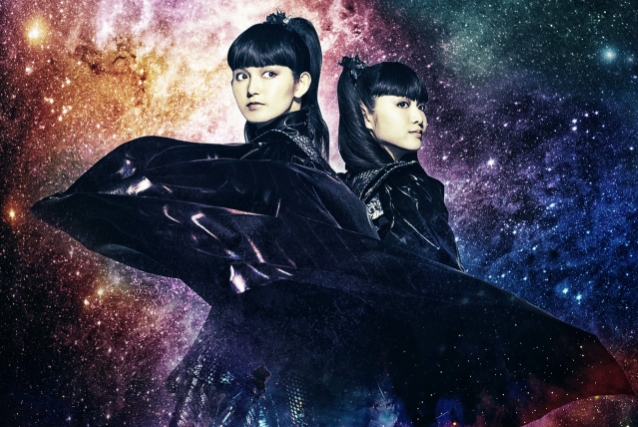 Filmed over two back-to-back "The Sun Also Rises" performances at the Yokohama Arena in Japan, the clip features an appearance from Thai rapper F. Hero, who guests on the track.

BABYMETAL will bring its live show to London's O2 Academy Brixton tomorrow (Tuesday, July 2) for an exclusive one-off performance, with support from AMARANTHE and SLEEP TOKEN.

Last week BABYMETAL revealed details of a brand new album, "Metal Galaxy", set for an October 11 release via earMUSIC/Edel. The follow-up to 2016's "Metal Resistance" will reportedly include the four singles that have been released over the course of the last few months: the aforementioned "Pa Pa Ya!!", "Starlight", "Distortion" and "Elevator Girl".

BABYMETAL performed at the U.K.'s Glastonbury festival on Sunday, June 30. The first BABYMETAL appearance in the country since the departure of original member Yuimetal saw Suzuka Nakamoto — BABYMETAL's oldest member who's also known as Su-Metal — and Moametal (a.k.a. Moa Kikuchi) joined onstage by Riho Sayashi, a member of the Japanese pop group MORNING MUSUME.

It is not presently clear if Sayashi will join BABYMETAL as a permanent member.

BABYMETAL spent all of 2018 touring without Yuimetal, who was formerly one of the members of the group's core trio. She later exited the band, explaining in a statement that she would go on to pursue a solo career as Mizuno Yu.

Over the last few years, BABYMETAL has established itself as the most globally successful J-pop group of the past decade.

The band describes itself as kawaii metal, kawaii meaning "cute" in Japanese.

BABYMETAL will embark on a fall 2019 U.S. headlining tour in support of its upcoming album. The band's first-ever full-scale headlining U.S. tour will kick off on September 4 in Orlando, Florida, and run through an October 16 in Seattle, Washington. The trek includes the previously announced October 11 gig at The Forum in Los Angeles, which will mark BABYMETAL's first headlining arena show in the States.

Support on the BABYMETAL tour through the October 4 show in San Francisco will come from the Swedish metal band AVATAR. The last two dates will feature THE H as opening act.