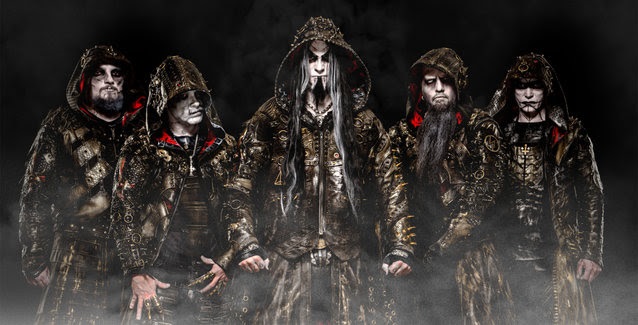 "Council Of Wolves And Snakes", the new video from Norwegian symphonic black metallers DIMMU BORGIR, can be seen below. The song is taken from the band's new album, "Eonian", which will be released on May 4 via Nuclear Blast.

The songwriting core of DIMMU BORGIR furthermore consists of charismatic vocalist Shagrath, as well as the string wizards Silenoz and Galder, but other familiar faces also emerge from the darkness: drummer Daray and keyboardist Gerlioz are still part of the team, and Gaute Storaas helped with the choral arrangements for the majestic voices of the Schola Cantrum Choir.

Shagrath states: "It's a song that sticks out from the rest of the album, it's DIMMU BORGIR going into an experimental direction, but you can also find a lot of black metal inspiration in the middle section of the song. We are a band that has never been afraid of trying out new directions and artistically, this is surely a very interesting and different track."

"Eonian" contains 10 new tracks, produced by the band itself and engineered by Jens Bogren. Emerging from the dark minds of the three songwriters, "Eonian" follows a philosophical concept, dealing with the illusion of time:

"Time, when not approaching it from the construct we're used to can't be defined and thus it is illusory," explains guitarist Silenoz. "There's only an 'eternal now,' which the album title is already hinting at. When we travel between the worlds seen and unseen, the perception of time ceases to exist, it has no function. Our energy is our torch and our compass when we make rifts and pierce through the veil — when we go beyond."

Shagrath adds: "'Eonian' represents the illusion of time, everything that is and always has been. For us, it also marks the 25th anniversary of DIMMU BORGIR and the album itself is a tribute to our own history and the Norwegian black metal history."

Silenoz told Metal Shock Finland about DIMMU BORGIR's long-awaited follow-up to 2010's "Abrahadabra": "We feel that we're sitting on the best album that we could possibly do at this time, and personally, I think it's definitely our best album to date. Obviously, that's something that everybody says, but if I didn't believe that we would do our best album, there wouldn't really be any point doing a new one. So, yeah, I'm really excited about it, and I know that quite a few fans will probably be positively surprised. And, yeah, we can't wait to get this stuff off the ground and get going."

Silenoz told Rock 'N' Roll Journalist last summer that all the writing on the new DIMMU BORGIR album was done by the core trio of Silenoz, vocalist Shagrath and guitarist Galder. "We had a little bit of assistance from the keyboard player, but it was less on this album than it was on the previous one," Silenoz said. "That seems to be working best and it means there's less cooks in the kitchen. [Laughs]"

As for the musical direction of DIMMU BORGIR's new effort, Silenoz, said: "I think it's safe to say that [the parts that are] more epic and majestic are more epic and majestic, and the same goes for the brutal sound of DIMMU and also the primitive and more black metal sound of DIMMU is more black metal this time around. So you will have the more extremes of each part that we are known for."

DIMMU BORGIR's latest release was the "Forces Of The Northern Night" DVD, which was made available in April 2017 via Nuclear Blast. The set contains two of the band's live performances: their legendary show in Oslo, presenting DIMMU BORGIR on stage with the Norwegian Radio Orchestra and a bombastic choir, as well as their entire performance at Wacken Open Air festival in 2012 in Wacken, Germany with almost a hundred musicians on stage.