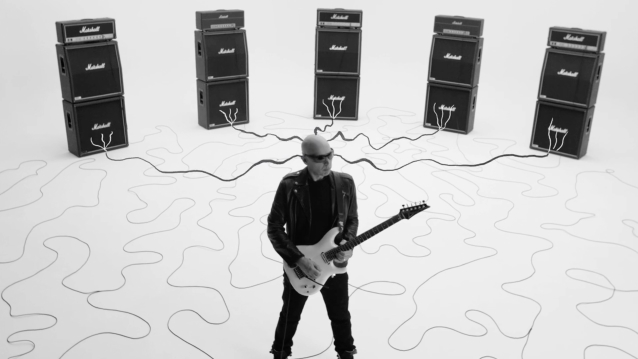 Joe Satriani's new video for "Nineteen Eighty", the first single from his forthcoming studio album, "Shapeshifting", can be seen below. The clip was shot and directed by Satriani's son, ZZ Satriani, who also filmed, edited, directed and produced the critically acclaimed documentary film "Beyond The Supernova" in addition to work with Sammy Hagar. Set in a soundstage as well as featuring clips from the new album's recording session, the video conveys the nostalgic feelings for the retro sounds of the song. "Nineteen Eighty" finds Satriani spiritually revisiting the time period when he was working with his first band, THE SQUARES. The future guitar hero would have to wait for his time, and the world came to know his name less than a decade later.

"The year that 'American Gigolo', 'The Shining', 'Raging Bull' and 'Caddyshack' came out, I just wanted to rock. 'Nineteen Eighty' is my high-energy throwback instrumental soundtrack to that year," explains Satriani. He recalls that in those early days, they "dialed back the guitar solos and histrionics to try to create a cooler new wave vibe." Now decades removed from those early goals, Satriani was free to go forward and recapture what was on his mind in 1980.

Set for release on April 10 via Sony Music/Legacy Recordings, "Shapeshifting" was co-produced by Satriani and Jim Scott (FOO FIGHTERS, RED HOT CHILI PEPPERS, TOM PETTY & THE HEARTBREAKERS) with longtime associate John Cuniberti on board handling the mastering duties. Satriani enlisted a wide range of collaborators, both old and new, to help him bring the songs to life. Legendary drummer Kenny Aronoff (John Fogerty),bassist Chris Chaney (JANE'S ADDICTION) and keyboardist Eric Caudieux were the core musicians on the new album, with additional contributions coming from Lisa Coleman (THE REVOLUTION) and Christopher Guest.

As previously announced, Satriani will embark on the "Shapeshifting" tour beginning April 15 with a 42-date European leg that currently winds up in mid-June. Additional dates, including in the U.S., will be announced soon. The 2020 touring band features Aronoff, bassist Bryan Beller (ARISTOCRATS) and keyboardist Rai Thistlethwayte (THIRSTY MERC) joining Satriani on guitar.