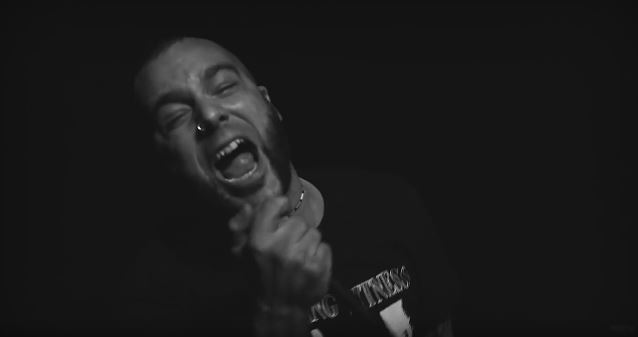 "Hate By Design", the new video from Massachusetts metallers KILLSWITCH ENGAGE, can be seen below. The song is taken from the band's seventh album, "Incarnate", which will be released on March 11 via Roadrunner.

Pre-orders for "Incarnate" will be available at iTunes and KillswitchEngage.com on January 29.

KILLSWITCH ENGAGE will embark on a North American headline tour shortly after the new album's release. They will be joined by MEMPHIS MAY FIRE and 36 CRAZYFISTS for the trek, with an opening act to be named shortly. The tour runs from March 16 in San Antonio, Texas to April 24 near Charleston, South Carolina.

KILLSWITCH ENGAGE guitarist and producer Adam Dutkiewicz recently told Revolver magazine that the band's lead singer, Jesse Leach, "hit a wall with ideas" during the songwriting process for "Incarnate" after completing the first three or four songs in the studio. "He couldn't find lyrics he was really stoked on," Adam explained. "But Jesse's a great lyricist and a great songwriter, so I just told him, 'Keep writing, and when you hit on something that inspires you, bring it to me.'"

The "Strength Of Mind" video can be seen below. The clip was filmed with the direction team of Ian McFarland and Mike Pecci (MESHUGGAH, FEAR FACTORY).