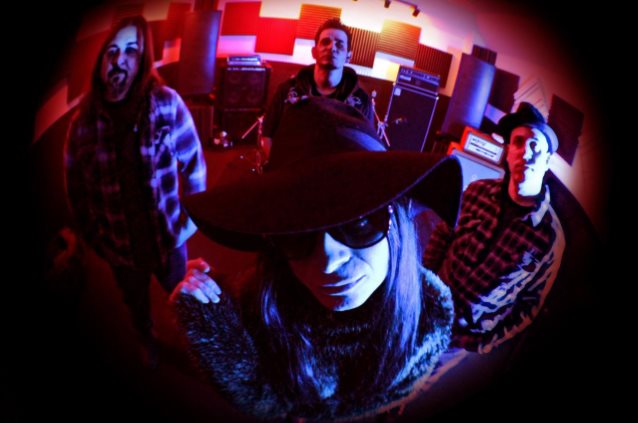 Video Premiere: LIFE OF AGONY's 'A Place Where There's No More Pain'

Reactivated Brooklyn hard rock veterans LIFE OF AGONY will release their new album, "A Place Where There's No More Pain", on April 28 via Napalm. The band's fifth studio LP will mark LIFE OF AGONY's first release since singer Mina Caputo (formerly known as Keith Caputo) came out as transgender in 2011.

The official video for the "A Place Where There's No More Pain" title track can now be seen below. The clip was directed by Leigh Brooks of Firebelly Films and was shot predominately in Hamburg, Germany with a few shots from the London show on LIFE OF AGONY's recent European tour.

"We were looking to capture the raw energy of our live show with the new video for 'A Place Where There's No More Pain'," says LIFE OF AGONY bassist Alan Robert. "As a longtime LIFE OF AGONY fan, director Leigh Brooks instantly knew exactly what we were going for. He's been a fan since the early nineties and we finally met at the Electric Ballroom gig in London last year. He shot that show and we immediately became friends. He's a super-talented guy with great vision and a deep passion for this band. He and his crew got pretty banged up shooting this one. [Laughs] They got right in the pit with their equipment — the poor guys! Leigh was one of the very first people outside of the band to hear the new music and he was completely psyched to be involved."

"A Place Where There's No More Pain" track listing:

"We have a long history of connecting to our fans on an emotional level through our words and music," added Robert. "And that's why I think there's something really relevant and timeless about the message behind the title track, 'A Place Where There's No More Pain'. It's about facing your problems head-on in order to find peace within yourself. A topic that really hits home for a lot of our fans struggling with their own demons. The opening line, 'running away only makes it worse,' couldn't be more true, because sooner or later those problems will catch up with you, and when they do, you gotta be strong enough to deal with them."

In support of "A Place Where There's No More Pain", LIFE OF AGONY will hit the road this spring in the Northeast United States. The first short run of dates kicks off April 27 in Allston, Massachusetts and runs through April 29 in Poughkeepsie, New York. The second jaunt begins May 12 in Stroudsburg, Pennsylvania and runs through May 20 in Sayreville, New Jersey.

Robert previously stated about "A Place Where There's No More Pain": "This record is a monster and we're so psyched to finally share it come April. It's got such an energy to it. Raging guitar riffs, heartfelt lyrics and killer grooves.