Due to a production error, the release date of the reissue of MOTÖRHEAD's 21st studio album, "Aftershock", originally scheduled for July 29 via UDR/Motörhead Music, has been pushed back to August 26. The CD was helmed by longtime producer Cameron Webb (MEGADETH, DISTURBED). The expanded edition will contain a bonus live CD — also recorded by Webb — consisting of live material comprised from the band's historic appearances in early 2014.

In further celebration of the reissue, UDR/Motörhead Music has released a video for the song "Lost Woman Blues", filmed live at The Warfield in San Francisco on April 18, 2014. The show was part of the band's warm-up mini tour for the upcoming European festivals. The song's performance, verve, swagger and attitude show MOTÖRHEAD have maintained their rich ripeness and added another layer of grit and polish. The video can be seen below.

MOTÖRHEAD canceled a handful of shows on its European festival tour in August 2013 after the band's frontman, Lemmy, suffered a haematoma (where blood collects outside of a blood vessel). The news of Lemmy's latest medical issue followed reports that he was also fitted with a defibrillator because of heart problems. The band also postponed a European headlining tour which was scheduled to kick off in November 2013.

Asked how Lemmy is doing now, MOTÖRHEAD drummer Mikkey Dee told Finland's Kaaos TV in May: "It's much, much better. He's been good for awhile. He's working hard on his health. We just did three weeks in the U.S. He's up and about. It's more to get going again. It's for the whole band. We've never been off eight months. But Lemmy's much better, and he played great when we did this U.S. leg, so I really hope that he can stay healthy. And he looks good, so that's all I can say. And he's working very, very hard on it, too, so all the best." 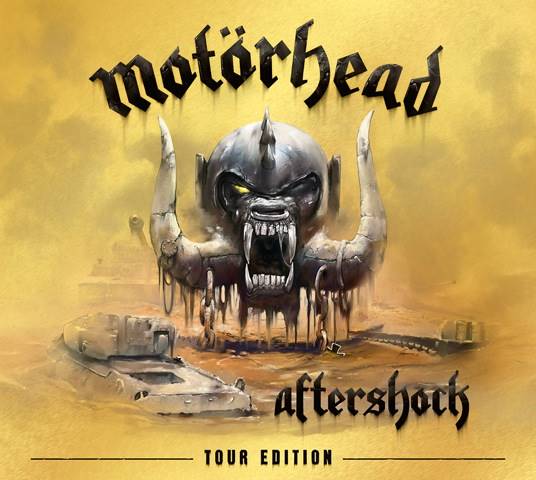