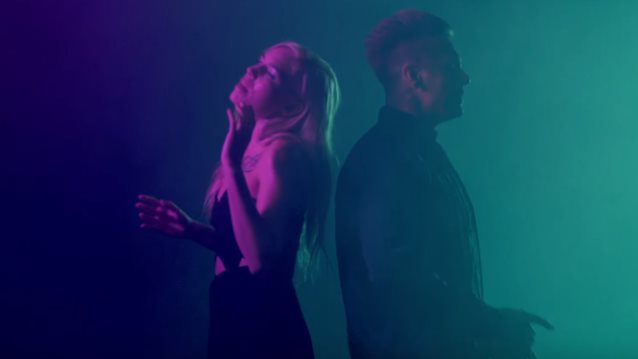 PAPA ROACH's video for the song "Periscope" can be seen below. The track, which features a guest appearance by Skylar Grey, is taken from the band's ninth studio album, "Crooked Teeth", which was released on May 19 via Eleven Seven Music. The disc was made available digitally and physically, as a standard (10 tracks) and deluxe (10 tracks + 3 brand new tracks + 16 Live tracks Live at the Fillmore Detroit) editions.

The "Periscope" video was directed by award-winning firm The Uprising Creative (Rihanna, Justin Timberlake, Big Sean, Lil Jon),which said the inspiration for the clip was "to create a moody, different look for the band using a stylistic light exploration — exploring color through light, projection and dynamic performances of the performers."

PAPA ROACH vocalist Jacoby Shaddix said: "'Periscope' is inspired by the realization that sometimes within a relationship you might not be worth being loved or that the other person may not be worth your love, and the struggle within that — how much effort it takes to make things work. One part that I think is really meaningful in the video is when Skylar and I are in the shot at the same time, yet we're not engaging with each other. It represents the 'disconnection' with two people, which is very much what the lyrics describe." Grey added: "You are loving someone from a distance, not able to reach them."

Regarding how the Grey collaboration came about, Shaddix told the Q103 radio station: "We wanted to have a guest female vocal on ['Periscope'], and on the last album, we had Maria Brink from IN THIS MOMENT on 'Gravity'. I didn't wanna just go in and grab another rock chick. I wanted to work with somebody that was outside the box and different but that I was a fan of. So I've been listening to this girl Skylar Grey for [a few] years now. And she's been on some great tracks — she's been on some Dre stuff, some Eminem stuff, she's been on a FORT MINOR track. But she's kind of this indie, alternative, pop type of girl, and she's just got a lot of credibility in that scene, and she's got a great voice, and I'm a big fan."

Written and recorded in a cramped North Hollywood studio, "Crooked Teeth" was produced by first timers Nicholas "RAS" Furlong and Colin Brittain, with the exception of "Born For Greatness", which saw the band collaborate with writer/producer Jason Evigan (Jason Derulo, Demi Lovato, Zedd, MAROON 5) for this positive, pulsating anthem. Furlong and Brittain, who grew up listening to PAPA ROACH, inspired the band to revisit some of the traits that personally endeared the band to them, most notably singer Jacoby Shaddix's remarkable rapping technique and the band's intense live energy.

"The first time we met up with RAS and Colin, they said that [2000's] 'Infest' was on constant rotation when they were growing up and they wanted to bring back some of that fire," says Shaddix. Adds Furlong, "The whole idea was to take the classic elements of PAPA ROACH that everyone loved and revamp them into a modern version of the sound through the creative process, and we ended up with a bold, courageous and more adventurous version of PAPA ROACH."

The Furlong/Brittain production team worked to bring in elements of music from different genres and parts of the world, and pockets of rhythm people associate more with rap or reggae, while still staying true to PAPA ROACH's sound. "The people who have wanted to hear me rap for years are gonna love some of the viciousness on this record," Shaddix proclaims.

From the instantly infectious nature of the title track to the atmospheric sheen of the moody ballad "Periscope" and the acoustic/ hip-hop rock mashup of "Sunrise Trailer Park" (featuring Machine Gun Kelly adding a verse to Shaddix rap) "Crooked Teeth" displays the various sides of PAPA ROACH and illustrates why they've managed to remain relevant while other musical trends ebb and flow. "We didn't go into this album with the intention of trying to write radio singles," guitarist Jerry Horton explains. "This collection of songs was really about bookending everything that we've done prior to this album and reintroducing PAPA ROACH to people who didn't realize the depth that we have," says drummer Tony Palermo.

In many ways making "Crooked Teeth" reminded Shaddix of the band's earliest days, well before they sold millions of albums and became a household name. "When we were in the rehearsal space I wasn't thinking about who I needed to impress, I was thinking about how much I love making music with the guys in this band," he says. "It [the album] feels honest and pure and that's all we could hope for," adds bassist Tobin Esperance.